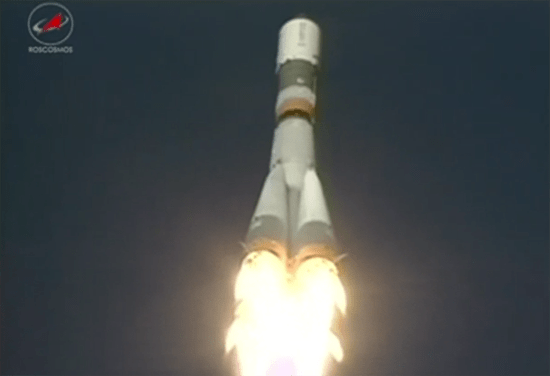 At 6:11 AM (EDT) an unmanned Progress resupply ship blasted off aboard a Russian Soyuz rocket from the Baikonur Cosmodrome in Kazakhstan, marking the first successful Progress launch since a crash this past August. The successful launch, designated Progress 45, is a welcome relief not only for the Russian space agency, but observers around the world as it points to the resumption of manned flights to the International Space Station later this year.

With the retirement of the Space Shuttle, Russian Soyuz rockets are currently the only way for fresh crews and supplies to be ferried to the ISS. After August’s crash, all future manned flights were grounded. This placed the ISS in a precarious position since although it had been fully stocked with supplies, the Russian spacecraft currently docked at the station have a limited lifespan of 200 days. Meaning that NASA and the other ISS member nations faced the odious possibility of having to bring the current ISS crew back to Earth before the Soyuz situation could be resolved and a new crew sent to the station, temporarily abandoning it. Thankfully, that scenario now seems highly unlikely.

While the station could be left temporarily unmanned and essential station functions operated remotely, the prospect of ending ten years of  continuous habitation in space would be a great blow to the station’s reputation. There would also be a lapse in the valuable scientific experiments carried out onboard. Moreover, it would mean that there would be no human presence on board to respond to unforeseen emergencies.

Though Progress craft are unmanned, the rockets that take them to orbit are very similar to the ones used in manned missions. Specifically, the third stage that failed in the August launch which is virtually identical in both manned and unmanned missions. Though the accident has certainly shaken up space agencies the world over, the Soyuz family of rockets remain one of the most reliable launch vehicle in the world, their roots going back to the early days of the space race.

With news of the successful launch, NASA’ associate administrator for Human Exploration and Operations Bill Gerstenmaier issued the following statement:

We congratulate our Russian colleagues on Sunday’s successful launch of ISS Progress 45, and the spacecraft is on its way to the International Space Station. Pending the outcome of a series of flight readiness meetings in the coming weeks, this successful flight sets the stage for the next Soyuz launch, planned for mid-November. The December Soyuz mission will restore the space station crew size to six and continue normal crew rotations.

The statement makes clear that although some hurdles still remain, both American and Russian officials are confident that the ISS will remain manned and operational going forward. The greatest obstacle, it seems, was proving that the Soyuz rockets were not inherently flawed and bolstering confidence with today’s successful launch.