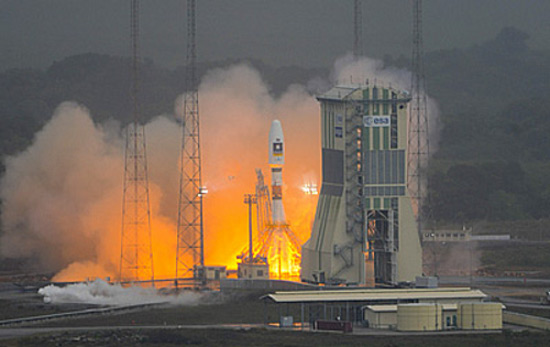 Today saw the successful first flight of a Russian-made Soyuz rocket from the European Space Agency (ESA) launch site in popular French South American colonial holding French Guiana. The liftoff was the first time a Soyuz rocket has blasted off from any location other than the six launchpads operated by the Russian Space Agency, and took place in a newly constructed facility at the Guiana Space Centre (GSC).

For the ESA, the flight bolsters the status of the GSC as a major player in space flight. It also works to cement relations between Russia and the ESA, giving both organizations access to an extremely reliable launch vehicle in the Soyuz and an ideal equatorial launch site. So ideal that the Soyuz realized a nearly 50% boost in efficiency thanks to the Earth’s spin, allowing the rocket to carry three tons into space instead of the normal 1.7 tons when launched from the traditional home of the rocket.

The cargo from the launch will also help lay the groundwork for the Galileo positioning system, which is expected to have greater accuracy than existing GPS. The Soyuz carried two Galileo craft, which will consist of some 30 satellites upon completion. Currently in orbit, the two Galileo satellites will be able to provide location information within three feet of the user, as opposed to 10 feet with conventional GPS. Interestingly, Galileo is touted on the ESA website as being European-owned and civilian controlled — a dig on GPS, which was developed by the Department of Defense and continues to be managed the U.S. government.

The launch may also serve to reassure those who have been concerned about the Russian Space Agency’s crash of an unmanned Progress resupply craft headed toward the International Space Station. Though the Soyuz-2 rocket used in today’s launch does differ from the Soyuz-U used in the abortive Progress mission, any good launch is good news.

With another successful launch under its belt and the new found ability to launch Soyuz rockets, demand has been booming at the GSC. According to Universe Today, the facility currently has 17 pending launch contracts. With the growth of this facility, the creation of new launch vehicles by NASA, and the burgeoning private space industry, it’s starting to feel like we could be entering a new golden age of spaceflight.