Shadow of the Eternals Kickstarter Returns | The Mary Sue

Shadow of the Eternals Kickstarter Reappears, Still Just as Shady as Before

This crowdfunding attempt is -- wait for it -- eternally dark. 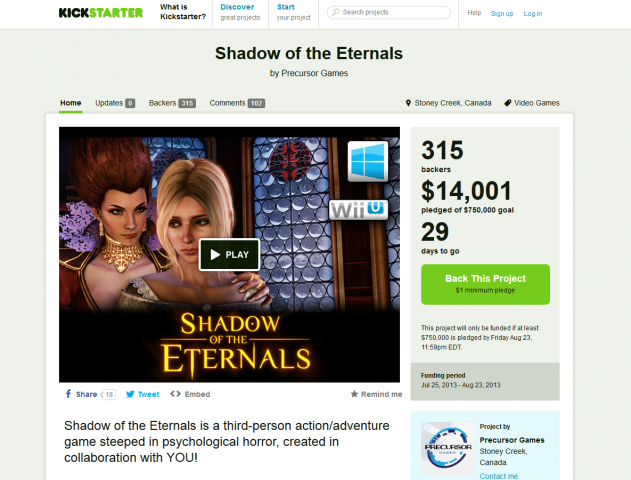 The Kickstarter for Precursor Games’ Eternal Darkness successor, Shadow of the Eternals, has returned to the crowdfunding website after two disastrous attempts. This time they’re asking for $750,000 to make the game, and they’ve dropped the episodic structure. They’re pulling out all the tricks to make themselves look better, but the whole thing still seems shady.

Perhaps it’s just my inner cynic, but a lot of this just reeks of a cash grab. The very suggestive banner looks like one of those shameless old “Come play, my lord” ads. They’ve hired David Hayter — who is legitimately awesome, and recently got the shaft in Metal Gear Solid V — but it feels like a ploy to get scorned MGS fans to fund the game more than anything else.

The big question for many of you may be: Is the infamous Denis Dyack still attached to the project? Yes. Granted, based on the Kickstarter page, he’s much more in the background of development now. This may all just be PR maneuvering, but it’s a good maneuver to make.

That’s on top of the whole “Kenneth McCulloch arrested on charges of distributing child pornography” thing. Speaking of which, after the McCulloch fiasco, Precursor took down their YouTube channel as well. They’ve since put a new one up with nothing but gameplay footage — I suppose that’s their way of trying to completely divorce themselves from McCulloch. According to Polygon, Precursor is saying that McCulloch was not a founding member of the company, when most places have previously reported that he was. Look, I know you can change history in your game, Precursor, but that’s not something you can do in real life.

Another notable change that the Kickstarter is promoting is that the game will no longer be episodic as originally planned, but one full 8-hour package. It’s had about as difficult a development cycle as Eternal Darkness 2 did back when Silicon Knights existed and were trying to make that. So good on them for persistence, I guess? Though given how murky this operation seems, I still don’t intend on helping to fund it. But after only a few hours, it’s already made over $18,000, so this is definitely looking like Precursor will get the money they need.