Presenting Soriti Horse, the Horse-Racing Solitaire Game From the People Behind Pokémon 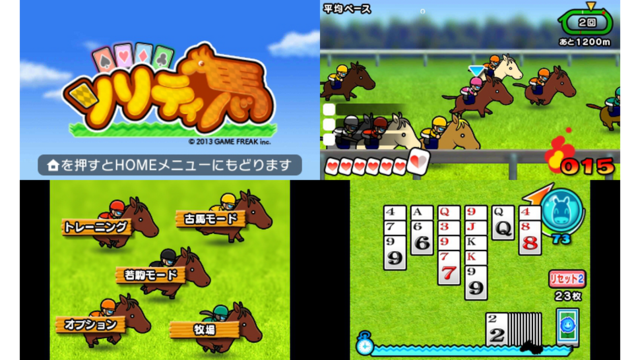 Game Freak is known to most gamers as “the developers that make Pokémon.” They had a couple weird platformers back in the day with Pulseman and Drill Dozer, but for numerous years now Pokémon has been their only focus. Now, they’ve decided it’s time to branch out. A game called Soriti Horse is coming. Because what’s the next logical step from games about raising monsters to compete against one another? Raising horses to compete against one another, of course. This isn’t just your average horse racing game — you play Solitaire to help your horse advance in the race, because sure, why not?

This is all a part of a recent program Game Freak has set up that allows staff to come up with new game ideas. If they get enough fellow devs to come on board with the idea and create a promising draft, then Game Freak will fund the project. The first example of this was HarmoKnight, a rhythm-action game that released on the 3DS eShop earlier this year. Unlike that title, though, Game Freak’s going to publish Soriti Horse themselves.

Despite the reveal today, Soriti Horse launches on the Japanese eShop next week for 500 yen. No word on if it will jump the pond, though knowing the Nintendo of America localization team, if it’s released in the U.S. the title will probably be some terrible pun. Something like Solitary Horse.