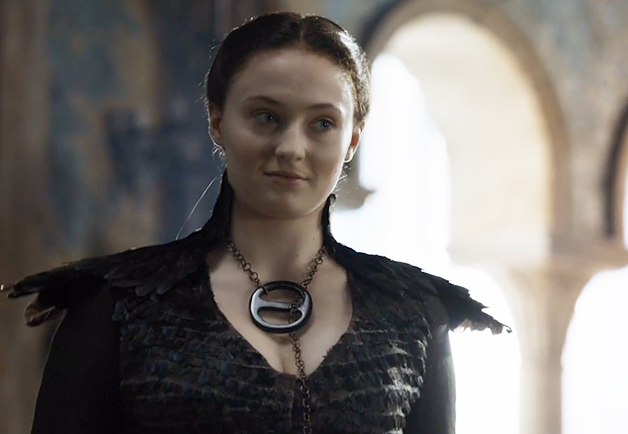 Okay, nerd-quiz time: if you were going to start drawing comparisons between The Lord of the Rings and A Song of Ice and Fire, who would be Sansa? After all, there areonly three major female characters in the whole trilogy. Leave it to Game of Thrones actor and number one Sansa Stark fan Sophie Turner to come up with a really twisted and awesome idea.

In a recent interview with Vulture, Turner commented on Sansa’s dark, manipulative transformation over the course of season four, and how by the end she seemed more like Sansa’ evil twin. “Actually, that’s the real Sansa, to be honest,” she said. “That’s how I look at her. The Sansa who’s been lurking in the shadows. She’s like Gollum and Sméagol.”

Wait, what? Gollum? She clarified:

“The Sansa you saw up until season four… I mean, in season one, that’s who she was. But in seasons two, three, and four, she was kind of using the facade of her season one self, to deceive. So I think what we’ve done, you missed seeing the progression into the dark Sansa, and we’re just seeing it suddenly emerge, because she’s been deceiving people with this mask. Or at least that’s how I see it!”

Yeah, it totally works when you think about it: both fell in love with a shiny, pretty thing (the Ring; King’s Landing) and then that thing totally sucked all the innocence right out of them, and now they pretend to be more wretched and pitiable than they are to garner favor from people in a position of power above them. But will Sansa, like Sméagol, succumb to the darkness and start strangling friends and family members? Because Sophie Turner maybe kind to wants that to happen, just a little bit.

“I would love for her to go on a massive killing spree!” she said, upon being told of the speculation surrounding a “controversial” Sansa Stark chapter that will appear in The Winds of Winter. “But not like with a sword. Poison, or something. Like a huge, huge killing spree. A mass murder. I think that would be kind of fun to play. I think I’m starting to have a dark side as well!”

So, wait, wouldn’t that make Sansa into Shelob? Because I can get behind that 100%. Eat all the orcs and tricksy hobbitses you like, baby. You deserve it.