Lady-Made Embroidery of the Solar System… From 1811 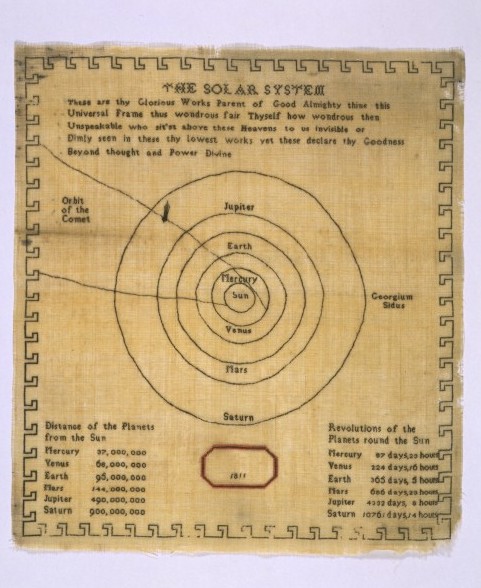 The Museum of Childhood recently published a picture of this hundreds of year old unfinished embroidery sampler that’s very unusual. Embroidery at the time was seen as a good pastime for a young lady, not just because it taught skills like sewing and mending but because it required “patience and concentration, and it kept women at home, focussed on a virtuous domesticity.” Samplers usually depicted domestic, lady-appropriate scenes, so not as to upset the delicate sensibilities of any passersby. This sampler, as you might have noticed, is instead a very scientifically minded model of the Solar System, roughly as it was known at the time, and thinks that this may have been the work of a science minded young woman itching for a way to interact with a field denied to her. For example, they note that the sampler is decades out of date with the planets as they were known in 1811. “That might explain why the sampler wasn’t finished. Who, in 1811, would want to spend weeks or months working on a picture of the Solar System that didn’t include the newest, most exciting planets?”

Previously in Science and Crafts