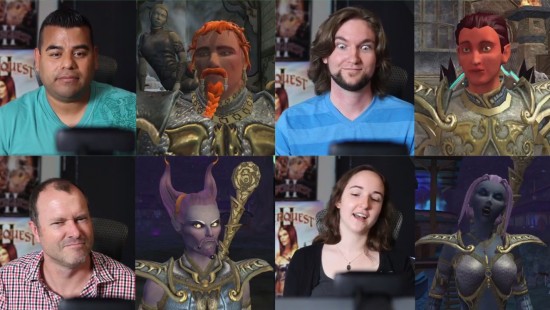 On Tuesday, EverQuest II launched a new feature for its players, SOEmote, that lets a player’s in-game character mirror their facial expressions. It also lets players customize their voices with a filter called Voice Font. All this was meant to make the game more immersive, but even if it doesn’t, it sure sounds like plenty of fun to mess around with. I know you’re snacking again, Steve. Your mouth is moving but you’re not talking.

SOEmote gives EverQuest II players direct access to the kind of facial animation technology which has been perfected for Hollywood, and we cannot wait to see what our community will create with it. The EverQuest franchise continues to break new ground, and we are proud to bring new depth to the franchise by giving players unprecedented tools for personal expression and interaction.

There are two parts to SOEmote: Live Driver and Voice Font. Live Driver is Image Metrics‘ facial analysis, expression tracking and animation technology that analyzes thousands of expression measurements per second to reflect the player’s in real time. Voice Font lets players sound like the characters they play, or like anything they want to sound like.

It does look quite good, and I like how it works with standard webcams. You can see a wide range of emotions in the test shots, mostly thanks to some smooth eyebrow tracking. The mouth movements and Voice Font, however, feel slightly unnatural and off-putting. Also, facial expressions don’t seem to transfer well onto the Ratonga and Froglok races in the video, but then again, I was never particularly good at reading non-human faces.

Here’s how to get it working:

Sony has a video contest up, and the best 30-second video featuring SOEmote wins a trip for two to SOE Live in Las Vegas. What do you think? Worth giving EverQuest II a try?