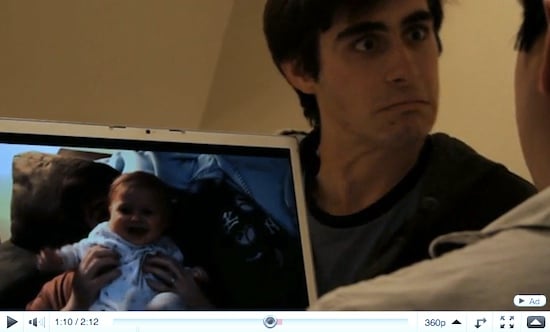 By now, the stirring trailer for “that Facebook movie” has burrowed itself deeply into the public consciousness. Though David Fincher’s upcoming film The Social Network isn’t released until October 1, well over 10,000 smug web users have already liked its fan page on Facebook, no doubt amused by the meta involved. It’s a testament to how effective the film’s marketing push has been (though by now we’ve learned to be cautious!).

Ever since, faux trailers about the rise of other successful web platforms have cropped up on the Internet. We’ve already showed you the YouTube parody, The Video Website. MySpace and, most recently, Twitter and eBay have also received the treatment. To help you along, we’ve published a guide to deconstructing The Social Network‘s trailer, so that any budding filmmaker can create their own spoof.

1. Sort of Profound Montage of the Stupid Things People Do on the Website

2. Explanation of How Ingenious and Lucrative the Online Business Model Is

With The Auction Site, the fine people at DrCoolsex Comedy remind us that before eBay, we sat on lawn chairs by the garage, waiting for someone to care for our old box of Pokémon booster packs we could no longer hold onto because we were moving, far away, and no one there would understand. On one hand, these faux trailers are surprisingly educational, in that they explain the site in question’s brilliant concept, forcing us to realize just how much we take these staples of our digital experience for granted…

… On the other hand, they’re also hilarious, because the mere notion that a website creator betraying friends and violently cutting off business partners on his path to power could be a poignant meditation on the postmodern human condition is just hilarious. Unless… that website was WikiLeaks (get to it, Internet)! In their trailer for The Video Website, Jeff Loveness and company portray an irreparable rift between YouTube founders Steven Chen and Chad Hurley with punches, drinking, and the threat of being sued in Internet court. We also assume Hurley was backtraced and reported to the cyberpolice.

4. Your Site Got X? Correction: My Site Got Y. (Y Being Infinitely More Impressive Than X, Which Was Already Kinda Impressive)

This is what separates the amateurs from the big leagues. It’s either like, “Wow Mike, your Blogspot site got 500 views today because somebody submitted your post to Reddit and people only clicked on it because it misleadingly had NSFW in the title,” or it’s like, “Your website got 5 million views this month. We’d like to acquire it for 500 million dollars.” In the case of The Twit Network, though, less is more — a clever little touch.

5. You Don’t Get to X Number of Y,Without Z (Z Being Something Malevolent)

World domination. Unfathomable wealth. Hordes of minions and willing sex partners. These rewards require sacrifice. And if you’re not willing to cut your losses, then you’ll forever be worth nothing — nothing! Max Linden, in his spoof The Other Social Network, sheds light on how the one and only Tom of MySpace, in his ruthless hunger for friendship (with cleavage-baring women and mediocre pop-punk bands), caused the once-popular social network’s downfall.

6. I Am an Awkward, Power-Hungry Megalomaniac Who Just Wants Recognition in the Boardroom

Awkwardly slack posture. Weirdly timed sentences. All signs point to a sociopathic savant, as Facebook founder Mark Zuckerberg demands that a Harvard boardroom recognize his achievements despite all his potentially criminal activity. Me, me, me — it’s a prerequisite for winning the Internet. Here the trailer for The Auction Site depicts a similar situation, during which eBay founder Pierre Omidyar asks to be rated for his success.

The clincher: Covering Radiohead’s already disturbing song “Creep,” the disquieting voices of Belgian girls’ choir Scala and Kolacny Brothers swell to a crescendo, setting the sinister backdrop for these trailers. We ought to consider anyone deranged enough to create a website with the slightest aspect of social media a downright creep. Because you see, their genius and success was simply borne out of their longing for connection. Some choice lyrics:

But I’m a creep. I’m a weirdo. What the hell am I doing here? I don’t belong here. I don’t care if it hurts. I wanna have control. I want a perfect body. I want a perfect soul. I want you to notice, when I’m not around. You’re so f*cking special. I wish I was special.

With these seven crucial rules in mind, you are now more than amply equipped to create your own version of The Social Network (barring of course, a crew, cast, and equipment). What should we expect next: The Whistleblower Wiki? The Craigslist Connection? The Geolocative Network? The /b/ Board? The possibilities are endless.