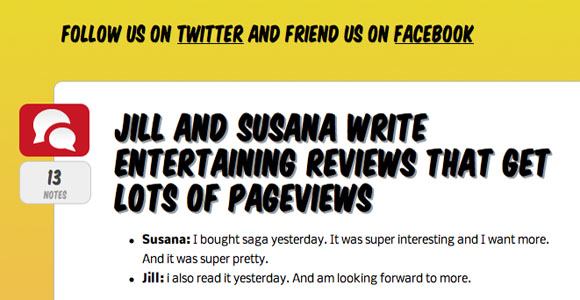 You like us, right? I mean, really, really like us? You may visit The Mary Sue regularly (and for that we thank you!) but did you know you’re missing out on a whole lot when you ONLY visit The Mary Sue? Read on to find out how!

We send out a daily newsletter (if you don’t already subscribe, feel free to input your email address on the right) but you may be missing out on the being the first to read about the latest geek news that’s fit to print! You wouldn’t want that, would you? No! And we don’t want that either!

Take for instance our Twitter feed. While Twitter may limit you to 140 characters, we’ve found that it’s an excellent place for sharing and debating, and , and even using the power of internet teamwork to come up with a list of good comics for young female readers on the request of another follower. We not only tweet out our latest articles but also re-tweet other items we may not feature on the site but think you might want to take a look at anyway. We also find it’s a great place to find interesting stories as well and love when readers share what they’ve found with us! And don’t forget, we often run exclusive contests on Twitter for awesome items.

The Mary Sue is new to Pinterest (though we’ve covered it before on the site) and we’ve found it…extremely addicting. We’ll leave it at that.

On Facebook, The Mary Sue is fostering more of a community atmosphere. Sometimes it’s just easier for our readers to share their thoughts on our articles there as well as engage in discussion with fellow fans. Something you won’t find on any of our other social networking spots are discussions that extend from our articles. For instance, yesterday we told you about scientists who invented a real sonic screwdriver. On Facebook, we asked what sci-fi invention you were waiting to see become a reality and the answers really ran the gamut of science fiction film, TV, and literature. Plus, we randomly run polls to get your opinions on the latest in pop-culture!

We’re also new to Google+ but don’t you feel compelled to be part of our circle? We’d love it if you were!

And let’s not forget The Mary Sue tumblr. It’s where you can find ridiculous conversations we have at work like the one in our top pic. But tumblr is a place of sharing, after all, and we share a lot more than our wacky antics, we also share wacky old comics like this one of Lois Lane, or serious debate topics such as Lucy Lui as a female Watson, or how about these super-terrific shoes with wings? You really never know what you’re going to see on our tumblr but one thing’s for sure, you won’t find our reblogs on TheMarySue.com. Hint: If you don’t have a tumblr, follow us on Twitter, we tweet our tumblr posts there regularly!

Ridiculous office conversations! Exclusive contests! Jamie’s tiny Kermit vacation pictures! Cardboard David Tennant! Competitive nerd polls! All that and more you can find on our various social networking outlets. And honestly, you’re going to want to know about something like dinosaurs wearing costumes before anyone else so you can be the cool kid who shows them off to your friends, so join us! And just in case you want access to everything we’ve got to offer, here’s some handy links and buttons for you…