Social Chromosome in Fire Ants Allows for More Than One Queen 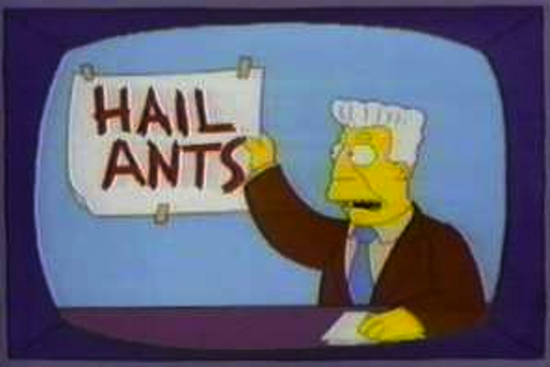 Nearly every science fiction flick offers the same solution when the heroes have to bring down an entire predatory alien race’s social structure: Remove the matriarch and the rest will fall. No problem for them since — advanced weaponry and flame throwers aside — there’s only a single queen to contend with, while us schmucks on Earth are left fighting a losing battle against a relentless foe governed by more than one ruling matriarch. Okay, maybe our endless war against the menace of  red fire ants isn’t as grandiose as those seen in the movies, but that isn’t to say that their being ruled by a council of queens doesn’t leave the human race vexed. Although red fire ants typically allow for only one female ant in the proverbial seat of power, some carry chromosomes that make them open minded to the idea of having more than individual bossing them around. Thanks to recent research, we just might be able have this genetic trait work to our advantage. Hear that, you ant bastards, we’re coming for you!

The red fire ant, if their genetic makeup makes them so inclined, can either live in a colony under the rule of one queen or up to a hundred or more. Scientists have tried to determine the exact chromosome that impacts the red fire ant’s conception of social order within the colony, only having recently discovered that they’re influenced by a special chromosome carrying one of two variations of a supergene — B and b — that, in itself, contains over 600 genes.

After analyzing the genomes of nearly 500 tiny test subjects, scientists noted that worker red fire ants born predominantly with the B gene are hardwired with the desire to see only a single queen act as matriarch, of whom carries the genes BB. Those born with the b gene, on the other hand, didn’t have panic attacks or rock themselves in the corner over the prospect of welcoming additional Bb female ants into the colony as a larger ruling body.

Further analysis also showed that b gene red fire ant colonies had a marked difference in population numbers when compared to their B gene brethren. Because of their natural predisposition toward accepting multiple females, b gene red fire ants have more inhabitants residing in the nest and, as a result, increased productivity. Their B gene counterparts, meanwhile, are left to suffer from their own narrow-mindedness and experience smaller numbers — not to mention increased stress meeting workload demands due to being understaffed.

One of the scientists of this study, Dr. Yannick Wurm from Queen Mary’s School of Biological and Chemical Sciences, said that the b gene red fire ant’s proclivity for having multiple queens can be used against them as a means to curtail associated pest control problems:

Our discovery could help in developing novel pest control strategies. For example, a pesticide could artificially deactivate the genes in the social chromosome and induce social anarchy within the colony.

Smart move, Wurm, with b gene red fire ants gone you’re eliminating the competition for the B gene variety, giving them a foothold in terrorizing mankind for the next thousand years or so. This really bites, both in the literal and figurative sense.