SOCCKET Power-Generating Soccer Ball Gets a Kickstarter to Expand Distribution 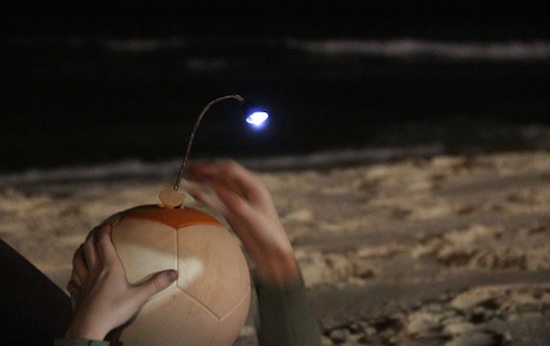 SOCCKET is one of the neater ideas in green energy I’ve been following lately. A durable soccer ball that houses a small generator, SOCCKET gets charged up when kids play with it — just 30 minutes of getting kicked around provides enough juice to power the included LED lamp for up to three hours. The project has been tested, revamped and improved in communities around the developing world, and as of this week, they’re trying to boost their ability to produce the power-generating playthings with a Kickstarter that’s worth at least your attention — and probably a little bit of your money, too.

What can I say — I’m a sucker for good design, and SOCCKET is one heck of a good design. Kicking the SOCCKET around powers a small generator and rechargeable battery combination in side the sturdy foam ball. After play time is over, kids can plug a small LED lamp into the ball’s socket and harvest the energy they built up during a game, transforming it into clean, bright, LED light they produced themselves.

Turning a soccer ball kids can play with during the day into a lamp they can read or do homework by at night is not going to save the world on it’s own. It’s an elegant, simple solution to one problem faced by people living in poverty, though, and that’s something. One problem at a time, after all.

Durability is key for a device that has to take a licking to keep on ticking, and it was a priority in SOCKETT’s development. The foam soccer ball is a little heavier than a standard ball, and it’s also airless, meaning kids can play with it without worrying about deflation that could also mean an end to their nightlight. The product has proven a success in small tests in Brazil, Mexico and elsewhere, but if it’s going to really get off the ground, production needs to ramp up, and that’s where you can step in and lend a hand. Check out the project and see if making sure a kid somewhere in the world can read a book after playing with their friends is the sort of thing you’d like to encourage.