So What Exactly Is Kwanzaa? 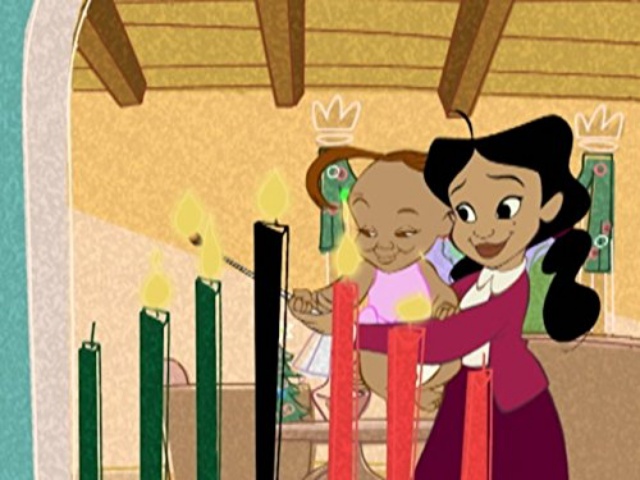 Today is Ujima the third day of Kwanzaa, which is something a lot of people might not know. Growing up my only real exposure to Kwanzaa was that episode of The Proud Family “Seven Days of Kwanzaa.” In my life, I’ve probably only known one adult person who celebrated Kwanzaa and I didn’t grow up with people celebrating the holiday.

What is important to understand about black identity is that African-American black culture (as in black people who are born here and have American slave ancestry), is different from other American born black cultures. As someone who is first generation black American (with family from the Caribbean), we don’t all celebrate the same holidays the same way or with the same food. I learned about Juneteenth this year from the show black-ish, and that holiday celebrates the official end of slavery. Kwanzaa also isn’t explored outside of black media and sometimes treated like a joke throw-away holiday. So what is Kwanzaa? Why is it celebrated? And why don’t people know more about it?

Kwanzaa is celebrated over the course of seven days starting December 26th to January 1st, in which a candle is lit for each of the seven principles or Nguzo Saba: unity (umoja), self-determination (kujichagulia), collective responsibility (ujima), cooperative economics (ujamaa), purpose (nia), creativity (kuumba) and faith (imani). There are seven candles, three green, one black in the middle, and three red. The colors are meant to represent the past struggle (red), the people (black), and the promise of a better future and the richness of Africa (green).

Kwanzaa is a non-religious holiday, so it doesn’t clash with Christmas or Hanukkah or Yule or any other holidays that might occur or overlap during the time.

The words are taken from Swahili, which was chosen because it is spoken by somewhere between 50 and 100 million people. It is also really easy for English speakers to learn because all the words are pronounced how they look. Kwanzaa comes from a Swahili phrase that means “first fruits.”

On the 31st of December, there is a feast called Karamu, where people come together for a feast and on the last day of Kwanza there is gift-giving, but it is not on the level of Christmas. It is more homemade personal gifts than iPads.

Kwanzaa has a publicity problem.

First of all the aesthetics of the holiday are very similar to Hanukkah to someone who is unfamiliar with the holiday. I remember as a child thinking that the kinara was just another menorah (or a hanukkiah for Hanukkah), even though it lacks two candle holders (hanukkiot have nine candle holders for the eight days of Hanukkah and one extra for the shamash, kinara have seven for Kwanzaa’s seven days). So as a kid I never knew the difference, and the people around me didn’t either. Most people who have heard of Kwanzaa when asked to name the names of the days can usually get Imani, and some people will think Harambee is one of the candles because of that The Boondocks episode.

Which is also says something about how people are exposed to Kwanzaa, a lot of it is through black television shows rather than educational processes. That means misinformation, humor that can sometimes miss the mark, and also because Kwanzaa is often relegated to one episode and then it’s Christmas all December after that, which doesn’t really enforce that it is something as important as Christmas.

Kwanzaa is a secular holiday around a time where all the holidays are religious in origin and therefore have longer traditions. Kwanzaa is just over 50 years old, having begun in 1966, and therefore has not fully entered the cultural zeitgeist the way other holidays around this time have.

There is also the man behind Kwanzaa, Ronald McKinley Everett, or Maulana Ndabezitha Karenga. In the 70s, about a decade after he created Kwanzaa, Karenga was arrested for assault and false imprisonment. One of the women he was accused of holding testified that she was stripped and beaten with an electrical cord. Karenga’s estranged ex-wife also backed up claims that he tortured women.

Karenga has maintained that this was a political attack as an attempt by the government to destroy the US Organization that Karenga founded, which did happen while Karenga was imprisoned. In 1975 he petitioned for parole and got it. Since then he has refused to talk about the incident.

Now, we do know that the government did conspire to undermine black leaders who they deemed as a threat. Their systematic Destruction of the Black Panthers via imprisoning and killing their leaders is not just conspiracy, it is factual. Is it possible that Karenga was a victim of this? Possible, but we will never know for sure.

It is that doubt that allows sites like the Daily Caller to publish articles that Kwanzaa is a “fake holiday” created by a rapist felon. For black women who are concerned about domestic violence and abuse, that would also give them pause to celebrate the holiday.

Oh, and it is treated largely like “the black holiday” so that also stops people from caring about it if it doesn’t apply to them.

How many people celebrate it and why?

Despite all of that, people do celebrate Kwanzaa. While the numbers vary depending on sources it is somewhere around 1.9 percent of people (roughly six million).  There are Kwanzaa greeting cards, a Kwanzaa stamp, and one park.

Regardless of it lacking universal celebration, it is still an important holiday for many black Americans. It was created to deal with the cultural damage left after the Watts riots in the 60s, and to create a sense of unity for black people that was for them, by them.

It is a time to celebrate and acknowledge black accomplishment and black heroes, it also ties back to the Civil Rights movement and activism on the 60s. It is a holiday that celebrates blackness and black struggle but also asks us to look to the future for hope and not to fall into despair.

I am not going to pretend that I am going to start celebrating Kwanzaa, I probably won’t, but that doesn’t make its place in the cultural sphere any less important. It possibly has heavily problematic origins, yes, but considering Christmas is 100%, not the actual day Jesus was born if he existed, and the Catholic Church has been problematic from the jump, I don’t think that dismisses it as having importance.

So if you haven’t thought about Kwanzaa, give it a second look. It may not be everyone’s cup of tea, but the intentions behind it are good and about community and hope. Which is what all the holidays around this season tend to be about.