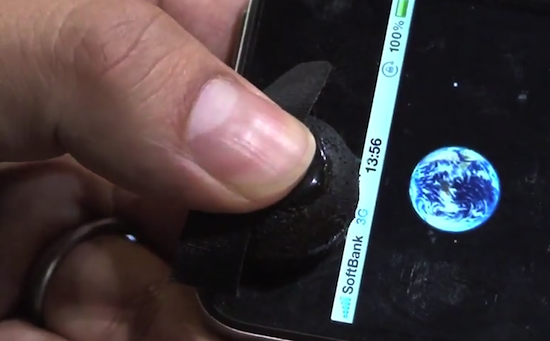 Smartphone gaming has quickly become a mainstay of our modern living-in-the-future culture. However, it’s not without its problems. Since most phones use a giant screen, putting your fingers on said screen blocks your view of the game. Motion controls are common on smartphone games, but are far from accurate. To the rescue is a research team from Keio University, which developed a gel-based device that converts your front-facing smartphone camera into a three-axis joystick.

Assistant professor Yasutoshi Makino explains that the elastic joystick works thanks to markings on its underside. As the joystick is deformed by the user pushing it with his or her thumb, these markings move together and apart. The front-facing camera, which the joystick sits on top of, observes these movements and translates them into motion on the screen. The technique was first developed in 2003 and was called GelForce.

In addition to not blocking the screen of the phone, the elastic joystick also provides physical feedback to the user. However, the quality of motion depends entirely on the camera’s hardware — its resolution, how fast it refreshes, etc.

As innovative as this device is, I still feel like it misses the point. One of the big advantages of smartphone gaming is that it uses a device that you already carry around all the time. What’s more, smartphones don’t need special controllers or other peripherals to play games — it can do it all thanks to the enormous screens that have become standard since the introduction of the iPhone.

Though gaming on a phone is far from perfect, attempting to solve it with an additional device defeats the purpose of gaming on a smartphone. Also, I have to wonder how many people would prefer using a gooey joystick instead of just swiping their fingers across their phone. That said, it’s an elegant solution to a tricky problem, and one that I am sure we’ll see again in a different form.