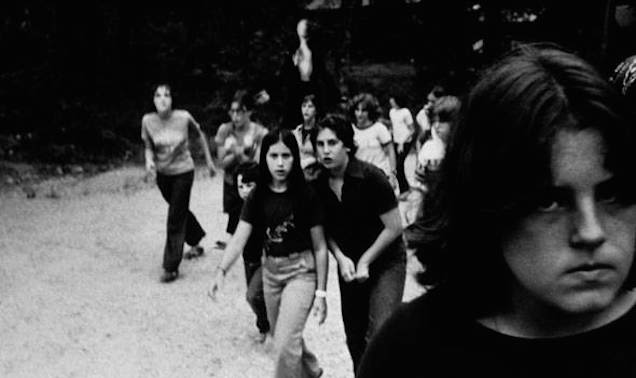 Alissa Weier, one of the two girls who stabbed their friend at age 12 in what they claimed was an attempt to impress the fictional Internet character Slender Man, will be institutionalized until she is 37 years old.

In 2014, Weier and Morgan Geyser were arrested after the horrific attempted murder of their friend Peyton Leutner in a wooded park in Waukesha, Wisconsin. Leutner survived the assault, which saw her stabbed 19 times by Geyser under Weier’s encouragement. All of the girls were 12 years old at the time. The young age and gender of the attackers provoked attention enough, but after the Weier and Geyser asserted that they were trying to win the attention of Slender Man, a shadowy figure out of the annals of the Internet, the story exploded.

Back in 2014, it was likely that many adults hearing about the case had never heard of Slender Man or “creepypasta,” which are horror stories, pictures, and memes that spread from forum to forum to website until they become the stuff of online legend. Slender Man was birthed in 2009 via a Something Awful photoshop contest, which saw him appear behind a crowd of children as a black-suited, looming, faceless entity with elongated limbs (and sometimes, tentacles).

This set the tenor for Slender Man’s expanded mythos going forward, which evolved as a sort of collaborative Internet folklore project: he almost always targeted children for his terrible acts, but obversely, he was sometimes seen as a protector and empowerer of children, especially those who needed his help.

Weier and Geyser claimed they were afraid that if they did not murder Leutner as a kind of appeasing sacrifice, Slender Man would kill their families. Yet they were not motivated from fear alone: they hoped that the act would demonstrate their loyalty to Slender Man, and that as a result, they would become his “proxies,” or followers, and would be permitted to live thereafter in his magical mansion in the forest.

It’s understandable that people were horrified by the girls’ act at the time, but the case also set off what amounted to a moral panic, which is defined as “a feeling of fear spread among a large number of people that some evil threatens the well-being of society … usually the work of moral entrepreneurs and the mass media.” Other examples of moral panics include witch hunts for centuries, the fear that Satanists were running rampant in the ’80s, or the idea that video games cause mass violence.

There were many loud voices and op-eds in the wake of the Waukesha case chalking the girls’ actions up to the unhinged depravity of the Internet, that it was a “black hole” that could lure children into darkness and danger—almost like those witches’ houses in the woods once might have done in the early days of folklore.

Yet if you watch the 2016 HBO documentary on the case, “Beware the Slenderman,” what emerges is not so much the rampant demonic forces of the Internet but a portrait of two deeply misguided and disturbed young women, lost to fantasy, shared delusion, and struggling through one of the most difficult ages of adolescence.

While I can in no way excuse Weier and Geyser’s actions, having once been a very young woman living on the Internet, I understand that reality and what you’re seeing through your screen can become blurred and comingled—especially when you have little control over your own real-world environment. My reading of the case is that the belief in Slender Man was not as real to them as the desire to subvert all norms in order to win a place of power, acceptance, and safety. And if Slender Man was truly real to them, then they were absolutely in a state of mind while committing the crime that requires assistance and aid.

If medical professionals and the jury have deemed Alyssa Weier not responsible for her actions due to mental illness, which they have, she should indeed receive help and rehabilitation. But the sheer amount of years that these girls are facing is utterly ludicrous to me. Their punishments are indicative of hardwired American sentencing cruelties and the lingering moral panic of the case.

To demonstrate how shaken the system was by the Slender Man stabbing, prosecutors had initially sought to try these 12-year-olds as adults and seek maximum adult sentencing for them—up to 65 years in prison. That Weier may now not be free until she is 37 years old after an event that took place when she was 12 strikes me as inhumane (her family had asked that she not be held past age 25, which seems like a rational request). Geyser, who did the physical stabbing of Leutner, has not yet been sentenced but faces “at least” 40 years in a psychiatric institution, if she is not held behind bars. That means that she might not see the outside world until she is 57 or far older. By contrast, many countries in the EU set the maximum prison sentence for actual murder by an adult at 30 years, with most prisoners serving far less time.

Is this sentencing justice for what happened? Will decades in an institution or prison help “fix” what was broken in these young women that led to such an extreme and violent act? The fact that our court system wanted to try these girls as adults subject to 65-year terms is outrageous. And yet, America’s criminal justice system is so deeply flawed to start that the girls likely only found the relative “leniency” that they have because they are white, female, come from middle-class families, and are the subject of media attention.

There can be no happy resolutions from this tragic case, but I could wish for a greater degree of sympathy and a punishment that is commensurate with the age and agency of the perpetrators when the crime occurred. In America, the worst of our horror stories aren’t always on the Internet.

(via Law & Crime, image: Something Awful)