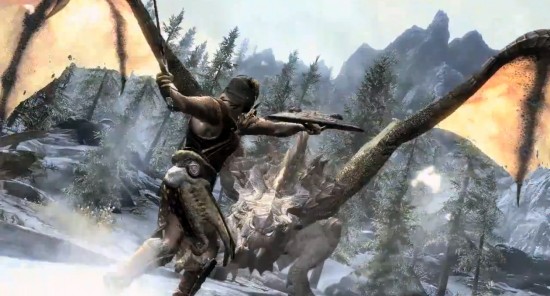 While gaming magazines are being replaced over here in the U.S. in favor of the Internet, at least one gaming rag is still going strong over in Japan, the venerable Famitsu. Notorious for its scoring system, the magazine has four different reviewers award up to 10 points each for a game, with the possibility of a 40 out of 40 perfect score. Since the very first issue released back in 1986, the publication has only awarded 17 perfect scores, but never to a Western game. However, this is no longer the case, as Famitsu finally broke that trend by awarding Skyrim with a coveted 40 out of 40.

Over the past 25 years, those 17 perfect scores have gone to Japanese developers. Sometimes those perfect scores are reserved for what both sides of the world consider the best games ever made, like The Legend of Zelda: Ocarina of Time and lesser-known Squaresoft title Vagrant Story. However, most of the perfect scores are from current-gen games, including a few odd choices like Bayonetta and the disappointing Super Smash Bros. Brawl. Even though modern technology does allow some amazing games, one wonders why Famitsu didn’t award perfect scores to many great games of generations past, as Famitsu likely didn’t have a time machine to pop into the future and compare those games to the types of games modern technology allows.

Aside from the lack of older games, some of those 17 games still seem a bit odd to have received a perfect score — Final Fantasy XII, for instance, though good, was seen as the perfect Final Fantasy by Famitsu over series favorites VI, VII or IV. Even odder, Final Fantasy XIII, generally considered the worst entry in the long-running franchise and something we’d all like to forget, received a score of 39 — one point shy of perfect.

Obviously, any gamer worth his or her weight in in-game collectibles will tell you attributing measurable scores to games isn’t the best way to go about reviewing games in modern times, so Famitsu’s past or present perfect scores probably wouldn’t tell a curious-but-unknowledgeable person where to start gaming, as Ocarina of Time is wildly different from Nintendogs, which also received a perfect 40 out of 40. However, it’s still nice to see that Famitsu has finally found something coming out of the West worthy of a perfect score, and it’s even better that it happened to a game as worthy as Skyrim. We here at Geekosystem give Famitsu a 39 out of 40 for catching up with the Western gaming world — it would’ve been a perfect score, but it took quite a while.