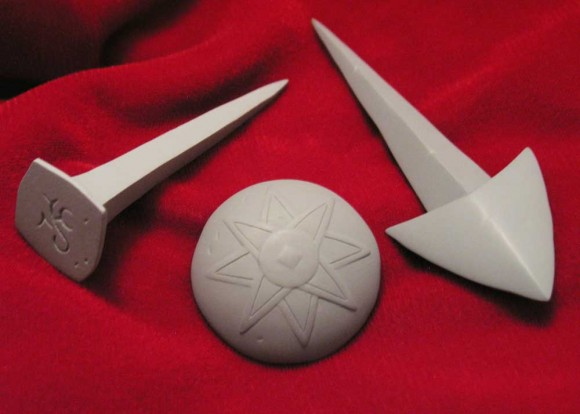 Just in time for the apocalypse, some tools to stop that kind of thing from happening. Skelton Crew Studio, the folks who have been producing amazing replicas of the keys from Joe Hill’s IDW horror series Locke & Key, the recent Chew project, and the just announced Mouse Guard line, have acquires the rights to Mike Mignola’s Hellboy. Specifically to create the “Artifact Archive Collection.” Above are the first prototypes of Bog Roosh’s Nail, Bishop Zrinyi’s Button and the Elf Shot. “I’m approaching these as pieces that would have been in the pouches of Hellboy’s belt orpicked up in B.P.R.D. members’ travels,” said Israel Skelton, owner of Skelton Crew Studio.“The possibilities are almost endless and so awesome.” Mignola himself said he’s “very excited” about the project. Expect to be able to purchase the finished props winter of 2013 and check out all of Skelton Crew Studio’s products here.