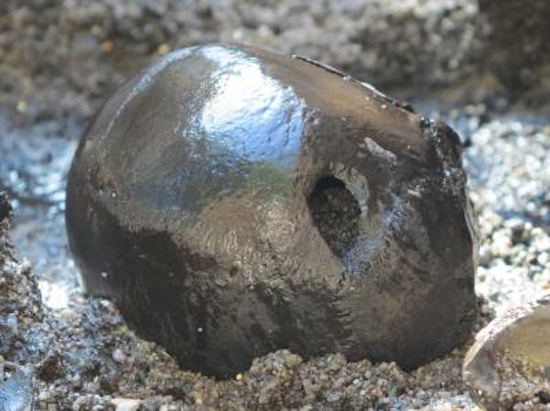 A team from Denmark’s Aarhus University is excavating a Danish bog at Alken Enge that is turning out to be a practically never-ending source of ancient human remains. The most recent discovery at this bog is a boon to archaeologists and necromancers alike — the skeletal remains of a 200 strong army whose lives ended at the bog. But wait, it gets magnitudes of order more grim, because those lives appear to have ended not in battle, but as human sacrifices.With so many remains on hand, the Alken Enge promises to provide researchers with valuable insights on how human sacrifice — not an uncommon practice in Iron Age Europe — was carried out in the region. It also promises to be the starting point for an undead army that will almost certainly rise up and wipe Copenhagen from the map, but hey, you can’t do science without disturbing the eternal rest of a few hundred angry warrior spirits.

The site at Alken Enge has been of interest to archaeologists since the 1950s, when a  cache of human bones including more than 50 skulls was discovered in one of the bog’s peat pits. Rather than a burial chamber, though, the pit was a jumble of shattered and fragmented bones suggesting that the bodies had not been lain to rest in the pit so much as unceremoniously dumped into a peat bog. What else would you even do with the army you just defeated on the field of battle?

Interest in the site was renewed with new finds in the last decade, and the Alken Enge dig has been back in full force since the beginning of July. Though it has been a productive month, turning up piles of human remains as well as a bevy of finely preserved weapons, the nature of Alken Enge means the going is slow. It’s a big dig, spanning nearly 100 acres, and remains are scattered across the site. The terrain of Alken Enge complicates things further — digging through a peat bog is rough work, and since most of the remains are now beneath the water table, huge pumps are running constantly in an attempt to keep the dig site dry enough in which to work.

The archaelogists aren’t the only ones working at the Alken Enge site. Geologists from Aarhus University are also on hand, providing some surprising insights on the development of the bog itself — like the fact that the bog was probably a small lake back when many of the bodies were disposed of in it. That goes some way toward explaining the wide and seemingly random distribution of bones, which would have been carried around in water for centuries before the lake became the peat bog it exists as today.

You can read more about the history of the site and its excavations at the Skanderborg Museum, which houses some of the bones and artifacts already recovered from Alken Enge. If your Danish is rusty, check out the English language site here.