Craig Ferguson and his Robot Skeleton: United at Last 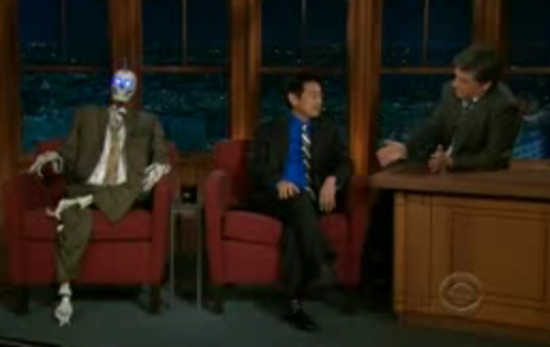 On last night’s Late Late Show, Craig Ferguson fans finally got the payoff they’ve long been waiting for in the form of Geoff Peterson, the robot sidekick that Mythbuster Grant Imahara agreed to build Ferguson if he could amass more than 100,000 Twitter followers. (It happened very, very quickly.)

Geoff Peterson’s robotic powers include laughing at any joke Ferguson tells at the push of a button, shooting off catchphrases, and, well, being a robot skeleton.

As jocular a pursuit as robot skeleton-building might seem, Imahara took the challenge of building Geoff Peterson quite seriously:

Named Geoff Peterson for no apparent reason, and inspired by Ferguson’s so-called Robot Skeleton Army of Twitter followers, the sidekick may look slapped-together on the outside, but its operating system is actually pretty sophisticated. “Craig pushes a button that sends a signal to a microcontroller, which generates all the pulses and commands to move these servo motors,” Imahara said.

“The microcontroller directs a dedicated sound board, which has seven audio clips on it. Push one button and it plays a specific MP3 file that Craig recorded in his own voice, then processed to sound like a robot. The servos will move the mouth, move the head and move the arm, all in perfect synchronization to the audio.”

Here’s the skeleton in action, as Ferguson interviews Imahara about the making of:

Lastly, here is a pretty awesome sketch Imahara made in preparing to build the bot; be sure to check out Underwire to see more sketches. 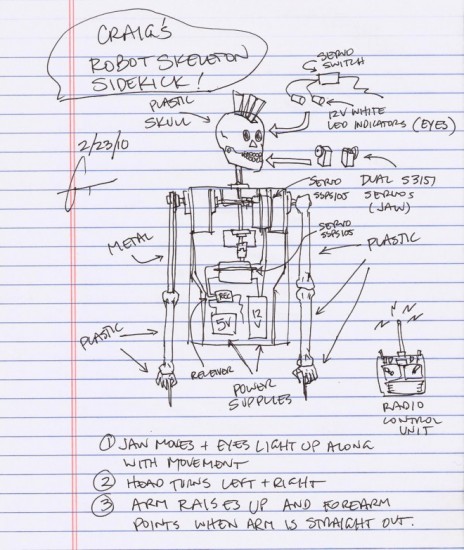