There are tons of varieties of electric cars, from the DeLorean to the Roberts, but now there is also one that is microscopic. Syuzanna Harutyunyan, of University of Groningen, and her team have been working on the smallest electric car ever and seem to have pulled it off by manipulating a molecule’s tendancy to rearrange itself for maximum energy efficiency. Basically, through using this process, Harutyunyan and her team were able to create little electric wheel-like things that will run when powered by electricity. 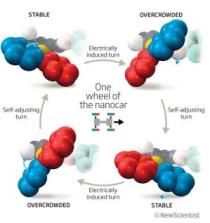 It works a little something like this: The car has 4 wheel-paddle things that act as its propulsion mechanism. When scientists apply an electric charge to the car, it makes the wheels rearrange themselves into an overcrowded state. From there, they rearrange themselves into a position they like better. Reapply the charge and you get another overcrowded state that they automatically correct and those 4 changes function as one turn of the wheel.

Of course, this little car isn’t terribly efficient. There are a few things that make it less than practical, things besides the fact that it’s microscopic. First of all, it works best in low temperatures. Really low. Like 7 kelvin (-266 °C) cold. That helps to ensure the wheels remain locked in place until they get a charge. Second, it’s not particularly energy efficient, it takes 10 electric pulses to travel 6 nanometers, or in layman’s terms, 6 millionths of the way across a pinhead. Lastly, related to being somewhat inefficient, it’s also slow.

But none of that matters really, because this little device isn’t about practicality; it’s about understanding. While there are plans to see if this baby can pull other cars, the real potential for this experiment is to try and figure out more about the way microscopic motors work and, specifically, why and how the naturally occurring ones in cells are so efficient. Too boot, this is motor research distilled to its most basic form. There’s no telling what kind of simple-but-revolutionary discoveries might come out of such a tiny, slow car.