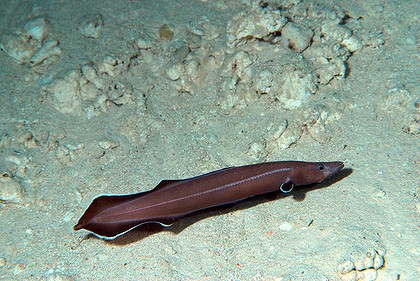 Proving once again that there are still places on our own planet that have yet to yield all their secrets, scientists have discovered a unique eel off the coast of the Republic of Palau in the Pacific Ocean. This eel has been dubbed a “living fossil” due to its unusually primitive features. These features led researchers to create a new taxonomic family to classify the eel in relation to other eel species.

The eel, described in the researchers’ paper in the Proceedings of the Royal Society B, is an 18cm-long female, collected during a dive in an 35-m deep underwater cave. The species was named Protoanguilla palau, according to the new family, genus, and species names bestowed by the researchers. According to the researchers from Chiba’s Natural History Museum in Japan, the Southern Marine Laboratory in Palau, and the Smithsonian Institute in Washington DC, the eel likely embarked on an independent evolutionary history millions of years ago.

The researchers conducted a genetic analysis to confirm that the creature was a species of eel, and one that had never before been described. The results of their analysis indicate that this eel probably started to evolve independently during the early Mesozoic era. The Protoanguilla eels may once have been more widely distributed around the world, but without any fossil record of these creatures, it is difficult to determine. This is what led the researchers to call the specimen a “living fossil,” because some of its features are more primitive than modern eels, including some that are even more primitive than fossilized eels from long ago.

A discovery like this can and will impact researchers’ understanding of how different eels species are related, and also serves as proof that there are still many species on Earth waiting to be discovered.

(via BBC, photo via The Sydney Morning Herald)