Oh Geez, The New Series of Simpsons-themed LEGO Minifigs Are Too Perfect

To borrow a line from a different show, we want to go to there.

So far we’ve been doing a good job of not buying the amazing(ly expensive) Simpsons house replica from LEGO, and our wallets have appreciated the effort. But now they’re releasing special minifigs at $4 each, and y’all, I don’t know that we can hold out much longer. Just look at their little mostly yellow faces. It’s too much.

There are minifigs that come with the house itself, of course — you get the Simpsons family, albeit versions that are a little more droopy-eyed than the above. This series, however, which is the first licensed LEGO minifigure series to ever be sold, also features fan-favorites like Mr. Burns, Milhouse, Ralph Wiggum, Apu, Itchy, and Scratchy. Hey, wait a minute, how come the only female characters are Simpsons family members? No Mrs. Krabappel? For shame, guys. Guess you’ll just have to keep making LEGO minifigs for us to buy forever and ever until we have literally all of Springfield in our possession.

Speaking of female minifigs, I’d like to point out that Lisa’s comes WITH A SAXOPHONE. 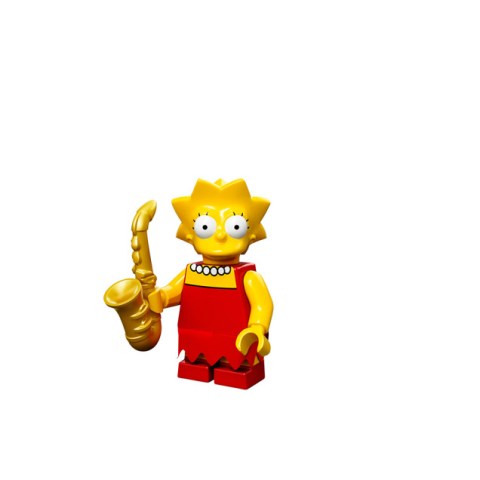 “I had a cat named Snowball. She died! She died!”

Although the saxophone isn’t the best accessory by far — that’s a tie between Ralph Wiggum, who comes with an “I Choo-choo-choose you!” valentine’s card, and Abe Simpson, who has a newspaper with the “Old Man Yells At Cloud” story right on the front page. 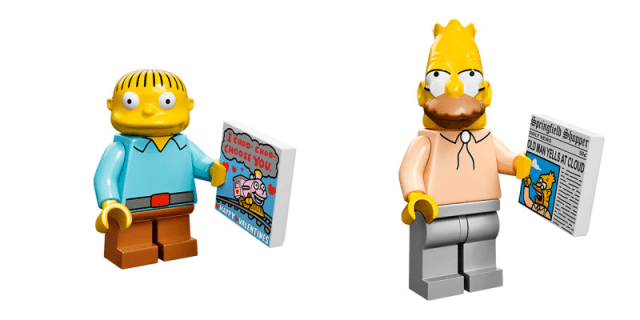 Luckily we have time to start saving our pennies, as the series will probably be released closer to the premiere of the LEGO episode of The Simpsons on May 4th. Yeah, you heard that right: a LEGO episode. We can’t wait.