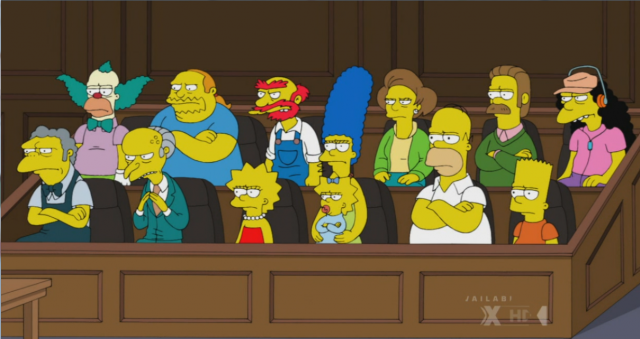 Great news for people who really enjoy once great television now rendered mediocre by time! Fox has announced that next year, The Simpsons and Family Guy will be teaming up for a crossover to be aired as part of the fall 2014 Family Guy season. If I were still in middle school, this would probably be amazing news. Alas, I’m not.

According to Entertainment Weekly, the episode will revolve around the Griffin family making a road trip that lands them in Springfield, where they will subsequently pair off with their respective foils to bond over the tropes that define their existence. Peter and Homer will bond over beer! Lois and Marge can be exasperated together! Lisa will show Meg some compassion and boosts her self-esteem enough that she can finally break free of the abuse she so often endures! At least, I’m only hoping that the last part will happen. Give Meg a break, guys.

This isn’t the first time that the Simpsons and the Griffins have existed in the same universe on network television, but it’s definitely the first time that such prolonged interaction between the two families has been cleared for broadcast. The Family Guy episode “Movin’ Out (Brian’s Song)” originally featured a scene in which Quagmire was depicted raping Marge Simpson, then killing her whole family. Fox refused to air the scene in the U.S. broadcast and demanded that the two shows stop making fun of each other, but the clip was still included on the Season 6 DVD and still airs on Adult Swim because everything is the actual worst.

Since then, the two shows have become more amicable towards one another. Dan Castellaneta was given a cameo in a Family Guy episode last year, and Seth MacFarlane had a pretty big guest role on The Simpsons season finale this past May. So, whatever, good for them, I guess — just as long as they all stay away from my Bob’s Burgers. Or rather, keep the Family Guy writers away from my Bob’s Burgers.