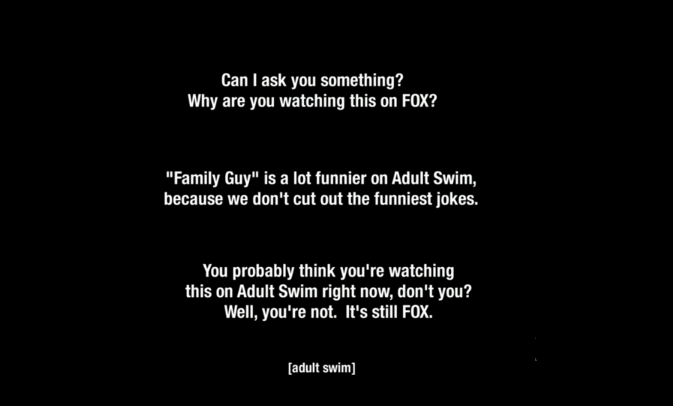 Viewers watching Sunday night’s new episode of Family Guy on FOX might have been surprised to see what looked like one of Adult Swim’s telltale white-font-on-black-background ads. Only it wasn’t during the commercial break: it was in the middle of the episode. And it plugged Adult Swim as “funnier” than Fox for not cutting out jokes. What gives?

In the words of the mock ad, which someone helpfully stitched together and posted on imgur: “Can I ask you something? Why are you watching this on FOX? Family Guy is a lot funnier on Adult Swim, because we don’t cut out the funniest jokes. You probably think you’re watching this on Adult Swim now, don’t you? Well, you’re not. It’s still FOX.”

FOX being broadcast and Adult Swim being late-night cable, Family Guy does get a freer hand on Adult Swim; most recently, the show tussled with FOX over an abortion-centric episode which FOX didn’t air.

An intriguing question: what’s Adult Swim going to do with the clip when they air it? The odds are against its becoming a valentine to FOX, but you never know …