When Sigourney Weaver talks, we will definitely listen. Especially when she’s talking about the planned Avatar sequels, but even more especially when she’s talking about the Ghostbusters sequel. And today, she has some things to say about both projects, and there is good news and there is vague news. I’ll bet you can’t guess which project the vague news is about! (Just kidding, it’s totally Ghostbusters 3.) 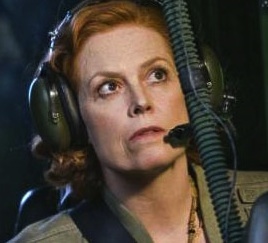 First, the good — and confirmed – news: Sigourney Weaver is going to be in both of James Cameron‘s Avatar sequels, which are scheduled to shoot back-to-back next year. And if you’re thinking, “Hey, wait a minute — didn’t her character, the human chimney-slash-xenobotanist Dr. Grace Augustine, die?” you might be wondering how exactly she’s going to be involved in this one. But I think you’re also forgetting that we’re talking about James Cameron here, who, according to Weaver, says that in science fiction, death doesn’t necessarily mean the end of the line.

“Don’t worry, I will be back. [James Cameron] says no one ever dies in science fiction. He’s told me the stories for the next two movies and I have to say that they’re absolutely wonderful and there’s a real treat in store. Now we just have to make them.”

As for Ghostbusters 3, which we last heard was going to start shooting in the spring, Weaver doesn’t appear to know exactly what’s happening with that. Which is how basically every single update concerning Ghostbusters 3 goes: “It’s happening, but there’s all this other stuff we don’t know about yet. But it’s happening … No … No, yeah, it’s totally happening.” She isn’t really sure if her character, Dana Barrett, will be returning, but she did include one detail concerning another character from Ghostbusters 2 who seems to have a confirmed appearance — her baby son Oscar, who would currently be in his early 20s.

“I have yet to read the script. I’ve had a couple of calls and I know they’re rewriting and all I said was that I hope my son, Oscar, has grown up to be a Ghostbuster and [director] Ivan Reitman said yes. Beyond that, I have no idea. I hope it comes together, but we already did two wonderful films and, if we have to let this one go, that’s fine.”

And what about her on-screen paramour, the elusive Bill Murray? Nope, still unsure about him, but she seems to further push the “Venkman is dead” rumor, saying that “his spectre always was with her, whether she liked it or not.”

Yeah, that sounds like the Venkman we know and love.