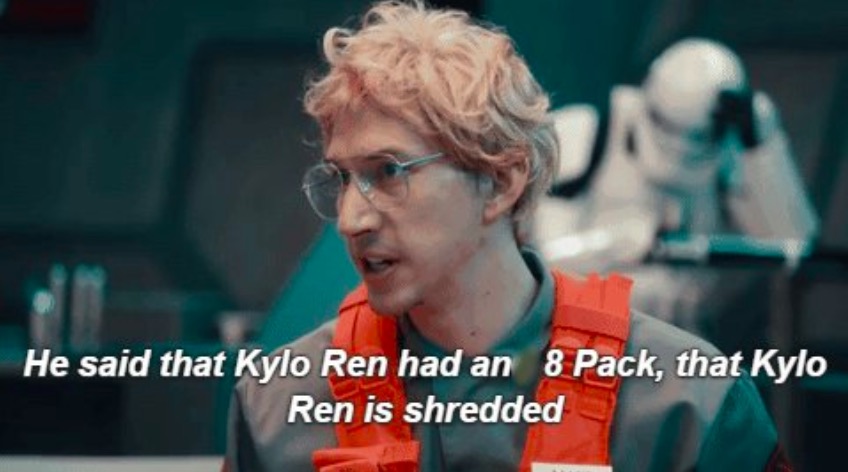 **Spoilers for The Last Jedi, kinda.**

Star Wars: The Last Jedi has only been in theaters for a little over a week, and already, a lot has been said about the movie, its quality, the way it handles fan expectations, the important representation it continues to boost in the franchise, and more.

But we’re not here to talk about any of that. We’re here to talk about shirtless Kylo Ren—the one spoiler that has been pretty much impossible to avoid. The scene wherein Kylo and Rey’s already intimate Force connection becomes even more uncomfortably close, as he shows up for their Skype session half naked. Or, like, 1/3 naked, due to those high-waisted pants.

It’s been so hard to avoid because it elicited such strong reactions that no one has been able to stop talking about it. When people talk about The Last Jedi being divisive, just know that they’re subconsciously referring to the fact that people were either very on board with or very disturbed by the scene, and nothing in between. Truly, a fandom divided by an impassable chasm.

Personally, my favorite part of the whole thing was Snoke’s revelation that he was the one who connected Kylo and Rey’s minds, which I’m guessing also means he’s the one who chose that particular moment to put them face-to-face, creepily dangling his shiny-chested young apprentice in front of Rey like “THIS IS WHAT THE GIRLS LIKE THESE DAYS, YES?”

But let’s check in on how the rest of the internet saw it, with all their jokes, fan art, and not-a-fan art. Warning: Like the original scene, you can never unsee some of this.

Hey everyone i just saw The Last Jedi so here are my thoughts on shirtless Kylo Ren: pic.twitter.com/PBd5ZAdu2c

I wrote you a love poem pic.twitter.com/RbhWoVRw4M

People also had some very different reads on Rey’s reaction:

dear diary
there have been some changes