That Shocking Sherlock Finale And What Lies Ahead, According to Steven Moffat 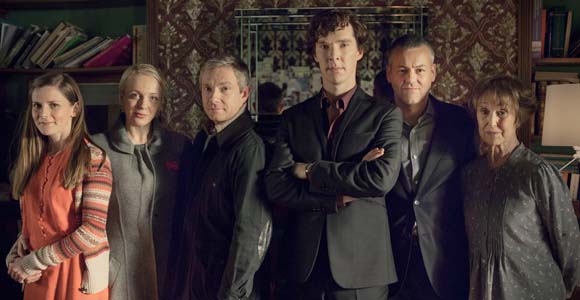 The Season 3 finale of Sherlock aired last night in the U.S. and with it came another cliffhanger (although perhaps not as dramatic a cliffhanger as Season 2). So what can we expect going forward? The creators are working on it. Read on to find out what they’re thinking and for a chance to discuss the big moments of Season 3 now that we’re all on the same page.

[Editor’s note: There are no spoilers about Season 3 until the end, where they will be noted. We will also be welcoming spoilers in the comments. You have been warned.]

We already found out a little while ago Steven Moffat and Mark Gatiss were busy at least plotting the next two seasons of the hit show. When Season 4 would actually see the light of day is another matter. Moffat and producer Sue Vertue recently spoke to Collider about the previous wait fans had to endure.

“Funny enough, two years seems to go very quickly when you’re making it,” Vertue told them. “I wasn’t that worried about it.  You do think, ‘Are they still going to be there?’  But the figures were up half a million in the UK, from the year before, so they haven’t gone anywhere, by the looks of it. It’s not ideal, but it’s the best we could have done. ”

They then asked Moffat if it was true they were actually working on Seasons 4 and 5. He said, “It’s really [Season] 4 that we’ve got, but it throws forward to a terrifying [Season] 5.  It wasn’t a planned thing. We had just got out of the rain and because we don’t have the lovely big trailers that Benedict and Martin have, we had to go sit in the accountancy department and we just talked about what we could do. We just started having what I think are the best set of ideas we’ve ever had.  I think they’re just wild.  And when I say ideas, it’s what stories we’ll tackle, what big twists there will be, what gut punches there will be, and what surprises there will be, and I think it’s really exciting.”

Even though there was general talk about maybe being able to have Season 4 ready by Christmas, any further forward motion on Sherlock takes a back seat to what Moffat calls his “day job.”

“We deal with scheduling.  I’ve also got to do Doctor Who. I’ve got no choice about that. That’s the day job,” he said. “We have no idea what we’re going to do. I’m starting the third week of the new [season] of Doctor Who, so I’ve got quite a lot going on. I doubt it. But, it’s a matter of when everyone’s available, and when Mark [Gatiss] and I think we’ve got a strong enough script. We’re quite picky. We want every episode of Sherlock to be really, really good. That’s out ambition. We don’t have to make a million episodes. We have to make some very, very good ones. The moment we drop that idea, it will stop being what it is.”

And what about the ideas they’ve had thus far? [Ok, here come the spoilers.]

Perhaps more than the unveiling of Mary as a super spy or the cliffhanger of the Season 3 finale (the apparent return of the thought-dead Moriarty), the events which took place just a few minutes earlier are what fans are more curious about. Or angry about. I’m of course referring to Sherlock straight up murdering Magnussen. Can’t help but see echoes of the recent choices made in Man of Steel. What did you think of finale or this season overall? Share your thoughts in the comments.