Mourn With Me: She-Hulk To be Cancelled With Issue 12 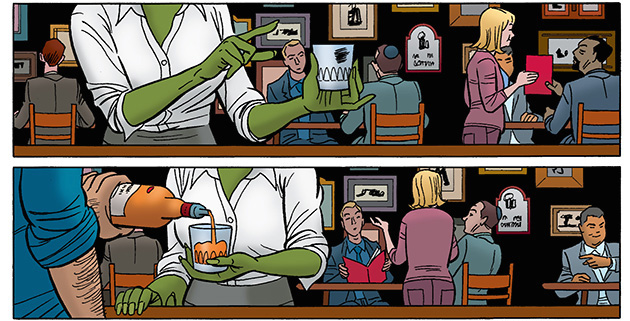 Comic Book Resources is reporting that with Marvel’s newly released January 2015 solicits comes the news that Charles Soule and Javier Pulido’s She-Hulk will be releasing its final issue. Twelve issues is not an unusual number for a series to be given before it goes on the market forces chopping block, but I’m still surprised that She-Hulk wound up there.

While I understand that not everyone agrees, I think the art is beautiful (not to mention a breath of fresh air, deviating from the usual superhero style). There’s little arguing that the layouts are inventive without losing the reader, and the stories are the kind of intricate small dramas emblematic of the best legal-themed writing. The series has a tense over-arching mystery, but never misses an opportunity to make fun of itself. It really felt like things were just kicking off, with She-Hulk‘s cast of characters settled, the over plot established and teased, and everybody getting together to save Captain America’s reputation.

I could go on about how important and unique I think Jennifer Walters is as a character, but instead let’s talk about what we know about the ending. January’s solicit info promises that we will get resolution on the overall Blue File mystery. It adds “But when one door closes, another one opens, and Jen finds herself face to face with her most important case yet.” So perhaps there is some hope that Jen won’t be benched as her series ends, but rather incorporated into another storyline. Likely we won’t know until Marvel makes an official announcement about it, or until we see February’s solicits next month.

…this is all punishment for how I didn’t find the time to cosplay Boardroom She-Hulk at NYCC this year, isn’t it?