A Beginners Guide To Buying Comic Books | The Mary Sue

How To Buy Comics: A Beginner’s Guide

The Low Down on Your LCS 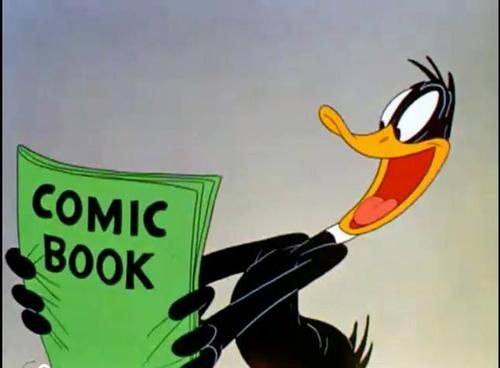 There are signs everywhere the demographics of comics readers are at the very least changing, if not finally being revealed as more diverse than popular wisdom has previously held. With comics like Captain Marvel, Ms. Marvel, Rat Queens, Lumberjanes, Saga and more dragging new readers into the fold by their collars, one of the things we’ve often been asked for at The Mary Sue is some pointers on how to get started buying comics. As a veteran weekly comics purchaser I find this totally reasonable, because buying comics is a retail experience that’s absurdly non-intuitive compared to the experience of buying any other kind of mass-market print publication.

In this post, I’m going to cover how to find a comic shop and set up and keep track of a pull list (I’ll explain what a pull list is, too). I’m also going to talk about how to get digital comics, because that’s another just as viable way to get your comic fix on.

But first I’m going to talk about why comics-buying is so weird in the first place. It starts with the concept of buying books on “consignment.” During the Great Depression, plummeting book sales created some very conservative book sellers who were unwilling to take risks on buying a lot of a new publication if they weren’t totally sure it would sell. In response, the book publishing industry introduced the idea of buying on consignment: bookshops could sell any book they’d bought back to the publisher for credit towards buying other books later. This shifted all the burden of unsellable inventory to the publishers (they even paid return shipping!) and freed up bookshops to take risks on new titles, and though some publishers have pushed back on the idea in the intervening time, it’s still mostly how things work in US book publishing these days.

Monthly comics issues are caught somewhere between books and magazines: they’re items of serial narrative, so the consumer wants to be able to start at a certain point to catch up to the story, but they’re released like magazines, here today, sold out tomorrow, the vast majority of them never to be printed in that format again. There’s no buying on consignment for comics shops: their leftover, unpurchased inventory is all on them. While there are some graphic novels which are published and distributed by book publishers (Persepolis‘ English translation is published by Pantheon, for example), the vast majority of comics which come out on a monthly basis in the US and England are distributed by Diamond Distributors in what’s basically a monopoly. But covering that monopoly is a whole ‘nother post, so I’ll just move on.

Many comics shops serve a small audience and can’t afford to take risks by ordering too much of a title, so it’s in their interest to be conservative about how many they order. But customers, in their turn, don’t want to show up on Thursday (new comics come out on Wednesday across the US), or, god forbid, Wednesday night, and find their issue was all bought up at their local shop. The solution between these two conflicting interests is the concept of the Pull List. 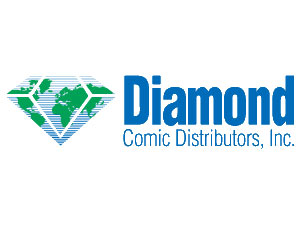 A pull list is a list you keep at your comic shop, for the employees of the comic shop, of all the comics that you want to read. The comic shop elves will make sure to factor in the needs of everybody’s pull list when they buy their comics from Diamond. Then, every week, the comic shop elves will check to see if any of your titles released an issue that week, and if they did, they’ll “pull” it by setting aside a copy of the issue just for you. All of the pull(ed) issues the shop takes care of are usually kept in comic boxes which are added to every week. If you’ve got your pull list up to date, it shouldn’t matter when you show up to buy your issues: they’ll all be waiting for you in the pull boxes. You can even add graphic novel releases to your list.

While there are other ways to get physical comics issues, the pull list is the best option for beginners. Diamond Distributors doesn’t offer magazine-style subscriptions to comics. Some larger stores will ship comics to you, but usually only if you’re reading around a dozen titles or more per month. There are a few other subscription options out there, but I personally don’t have experience with any of them. If any readers do, please weigh in in the comments!

There’s one more very important effect of the lack of consignment in the comics industry I should talk about. Because of consignment, book publishers have intimate, direct knowledge of how much a book is selling. No need to survey book shops about their inventories, publishers know if the books haven’t been sent back, then the shops are selling them. But in the comics industry, the success of a title isn’t based on how many issues are bought by people. It’s based on how many issues are bought by retailers. A popular title which sells out of shops and a title that is widely ordered by retailers but gathers dust on shelves is essentially the same success story for a publisher. A shop is quite likely to order extra copies of the latest Batman, Superman, Spider-Man, and X-Men titles because those are popular, they’re recognizable brands, and the most likely impulse buys. But when a publisher notices a retailer groundswell of pre-ordering for comics about a group of lewd, hard drinking female adventurers in a post-modern D&D-type setting, your pull list just helped add some diversity of subject and characters to the comics industry.

So you don’t have to set up a pull list. But it does two things: it means you’ll never get to the comic shop too late to get your issue (barring human error, of course). And it helps your comic shop know how much dedicated interest there is in a title, which makes it easier for them to manage their inventory. And, because your shop will now be regularly pre-ordering your titles, that will translate to the publisher knowing there is that much more dedicated interest in your titles. 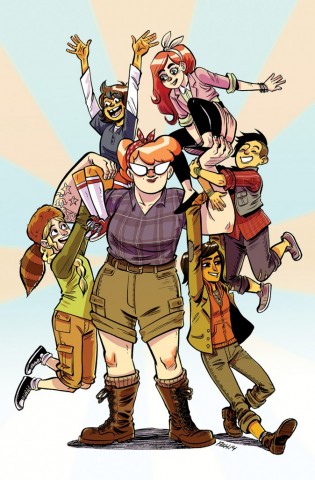 Lumberjanes #3 variant cover by Faith Erin Hicks.
How to Set Up a Pull List

See, I told you I’d get around to talking about how to buy comics.

It should go without saying: if you don’t like a comic shop for any reason (the staff are unhelpful or rude, the posters of broke-backed superheroines are numerous and irritating, the whole place is just too cluttered to maneuver around comfortably) you don’t have to patronize them! That stuff is on them. There are plenty of other ways to get your comics fix on.

Side Note: Lets talk about your secret weapon in keeping track of your pull list: PullList.Comixology.com. While this site has taken a backseat to Comixology’s digital arm, it’s still an invaluable resource for knowing when your comics are coming out. Some stores actually use it to organize their pull lists directly, but I’ve never actually patronized one, so I can only dream of how convenient it is. See, I am super bad at editing my pull list. I always think about it when I’m sitting in front of my computer, but never when I’m actually in my comic shop. This means I basically only edit it when I know I want to start reading a whole series, and I consistently forget when to check the big wall of new issues for new things I’m interested in trying out.

Except I don’t forget, because I also keep an account on PullList.Comixology.com. I can edit my pull list there with a minimum of personal effort, from anywhere with a web browser, and once a week on Tuesday night I get an email telling me what issues on my list are coming out that week. When I get to my shop and pick up from my box, all I have to do is compare the issues in there to the list to know whether I should check the wall for that new series I’d like to give a trial run. If you find you have the same problems remembering to edit your pull list, I highly recommend it as a way to stay current on releases and keep your list fresh.

So lets say you don’t have a local shop to patronize. Maybe you had a bad experience, the nearest place is hours away, or your shop is two towns over and there’s no way to get a ride (a.k.a., me, age 16-19). Lets say you live in a tiny apartment, and the idea of keeping boxes of comics around gives you the organizational shivers.

Digital comics are here to help. 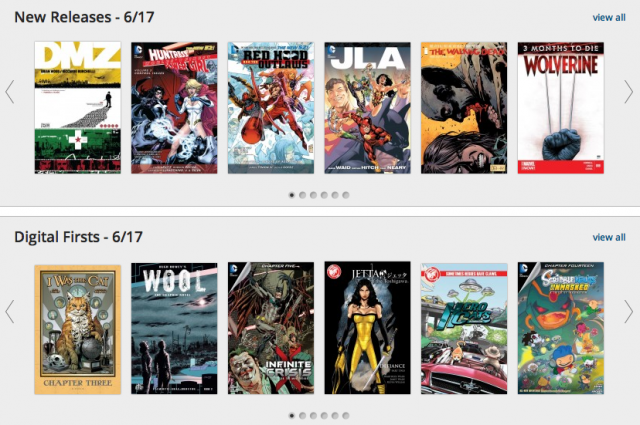 How to Buy Digital Comics

Okay, so maybe it’s not quite that easy, but nearly. The fact is Comixology dominates the digital comics market. Take a look at this list of publishers whose comics you can read through their service and note how on an alphabetical list there are still twenty one companies before you get to Archie Comics. Many of the companies available on Comixology also have their own digital storefronts, like that of Marvel Comics, but your easiest road to reading digital comics is with a single Comixology account, rather than separate accounts at different publishers. They’ll even allow you to set up subscriptions which will automatically purchase each issue in a chosen title whenever it comes out. That said, there are some notable exceptions to Comixology’s coverage, primarily Dark Horse Comics, home of Hellboy, The Umbrella Academy, and the Avatar: The Last Airbender, Dollhouse, Firefly, and Buffy The Vampire Slayer comics. Dark Horse prefers to publish their titles on their own digital outlet exclusively.

Even folks who prefer physical comics can find digital useful. For one, it’s a great way to read any issues your brick and mortar store ran out of, or catch up on an ongoing series you missed the beginning of, without waiting for the collected edition or searching all over for back issues. And if you’re not so much interested in new issues of Marvel comics, but would love to read their classics, you’ll definitely want to check out Marvel Unlimited, where instead of buying classic issues one by one, you can pay a subscription fee to get access to over 13k comics, none younger than six months old.

So there you have it: the two major ways to purchase and read monthly American comics! Many of these rules may also hold true for England, as there’s a lot of overlap in the comics culture between our two shores, and, of course, digital comics are truly international. Now that you all know how to get your grubby little hands on all the comics your hearts desire, tune in next week for a new weekly series on what we think you should be reading every week.

And if anybody can think of a clever name for such a series, let me know in the comments!