Then we'll meet back at the Winchester and wait for this all to blow over! 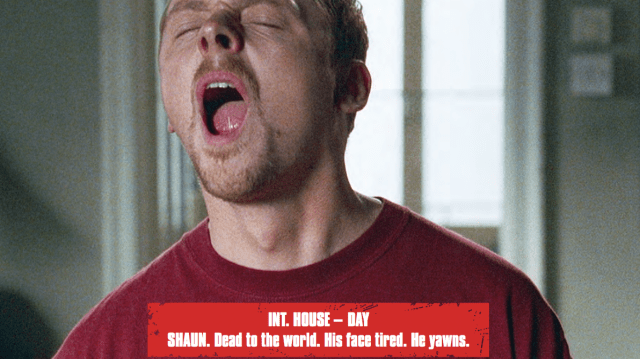 Ten years ago exactly, Shaun of the Dead was first released to in UK theaters. Of course, North American audiences wouldn’t get a hold of the film for another five months, but that doesn’t mean we can’t honor it’s decade-long legacy by perusing its script, along with the scripts for Hot Fuzz and At World’s End.

If you go onto filmmaker Edgar Wright’s official website today, he’s made the scripts for all three films of the “Three Flavors Cornetto Trilogy” (so called because there’s a Cornetto ice cream cone that appears in each movie) available as free downloadable PDFs. You can also view the scripts via a flash portal on the site, but trust me, it’s easier to just download ’em. Each of them is also full of original storyboards, graphics, and stills from the movies — you know, in case you suddenly forgot what Simon Pegg and Nick Frost look like and need a refresher.

Of course, if you’re not a fan of script-reading, you can also celebrate the anniversary the way that Pegg and Edgar Wright actually did:

10 years ago today, me and @edgarwright snuck into the Odeon, Camden, to watch our first film on its release. Cheers! pic.twitter.com/WETQxRLlTx

Of course, Pegg stressed on his Twitter that he did actually pay for his ticket, and also he was kind of in the movie, so you might have a hard time recreating that particular experience. Maybe just stick with the scripts and a pint at your local pub instead.

(via Edgar Wright on Twitter, image via Three Flavors Screenplay)