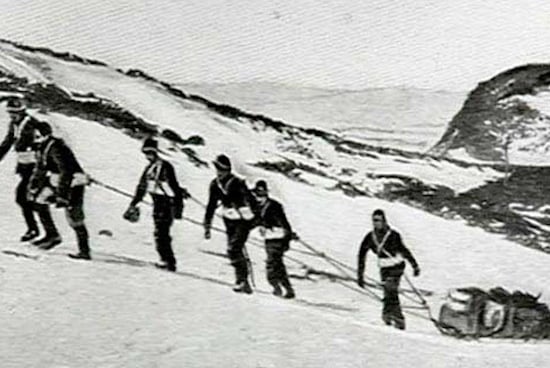 Here’s a new one for our ever growing file of stories labelled “idiots doing idiot things because they’re idiots” — an Australian professional adventurer is hoping to recreate the last leg of polar explorer and mind-blowing badass Ernest Shackleton’s ill-fated expedition to cross Antarctica by land. That’s not the crossing of Antarctica that the expedition was meant to be, but the grueling fight for survival against all odds it turned into. After all, we assume the way you get to be an Australian professional adventurer is by accepting dumb bets in bars and then endangering people’s lives needlessly carrying them out.

Explorer Tim Jarvis and his team won’t be setting out to retrace the steps of the doomed expedition, which saw Shackleton’s ships beset by ice and frozen in place before they even made landfall. Shackleton’s journey ended before it began, turning into a grueling, years long trek back to civilization marked by the miraculous survival of nearly every member of the expedition. They’ll be towing a lifeboat over ice floes and brutal, frozen terrain and following the route taken by Shackleton and five other back to civilization, where they arranged the rescue of dozens of other marooned men who had been given up for dead. To make his journey more adventurous — translate: dumber — Jarvis and his crew are making the trip with the same kind of rations and gear that Shackleton’s men had on their 1914 expedition. That means eating lard rations and navigating without the aid of modern tools like GPS. Says Jarvis:

I’m expecting constant hardship and vigilance; there are periods of darkness down there, we’re on a boat with absolutely no modern navigational aids whatsoever, we’ll just be going into darkness.

Anyone who’s interested in the original story of the Shackleton expedition — it’s a real doozy and one of the world’s greatest tales of survival — should check out Alfred Lansing’s excellent account in Endurance. It’s a much more comfortable way to honor the trials of one of the last great journeys of the age of exploration. You can even sip a cup of warm tea while you read it, which is very high praise for a thing so far as we’re concerned.

We wish Jarvis and his crew the best in their really just monumentally stupid endeavor that will prove once and for all that Tim Jarvis is more badass than Shackleton, we guess? Take that, guy who has been dead ninety years! Oh, wait — there will be a steel-hulled support ship trailing the expedition in case of serious emergency? Huh. We never mind, then. Now we officially don’t know what this guy is trying to prove.