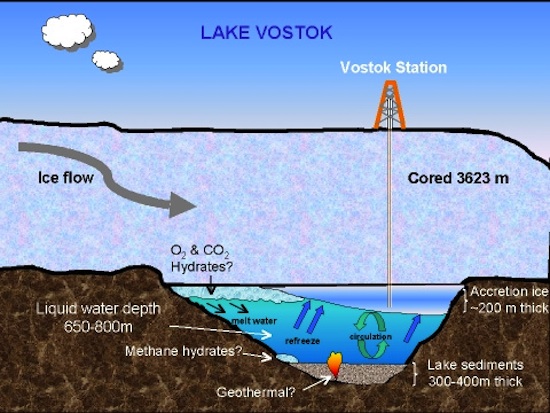 Earlier this year, a team of Russian-led engineers and researchers drilled a hole into the Earth, breaking into Lake Vostok, a liquid water lake sealed beneath the ice of Antarctica for nearly 15 million years. They were looking for signs of life in the lake — microbes that might offer clues to what sort of creatures we could expect to run into on icy moons elsewhere in the solar system, like Saturn’s satellite Europa. This week, the first analyses of water samples from the lake are in, and they’re pretty disheartening. Lake Vostok appears to be devoid of microbial life.

For people who were hoping that Vostok would prove an example of life triumphing over adversity and thriving in the most seemingly desolate and unforgiving environments, that’s a major letdown. If you were hoping that finding life in Vostok would light a fire under space agencies to start looking for life in similar environments that we can reach in the solar system, it’s an even bigger one, as this is not the sort of result that drives investment in exploration. After all, no one wants to spend hundreds of millions of dollars to send a robot to drill a hole in an icy moon just to find out it is full of cold water. We could be blowing people up with that taxpayer money!

This certainly isn’t game over for the idea of finding life in the long sealed lake. After all, we are literally still just skimming the surface of Lake Vostok, and there’s still the chance that microbes could be thriving toward the deep end. At least, that’s what researchers are hoping. Otherwise, they just put a Herculean effort into drilling a really, really deep hole right into the planet’s past and don’t exactly have a lot to show for it.