Sex and Gender in D&D Next Interview | The Mary Sue

Dungeons and Literally a Five-Headed Dragon 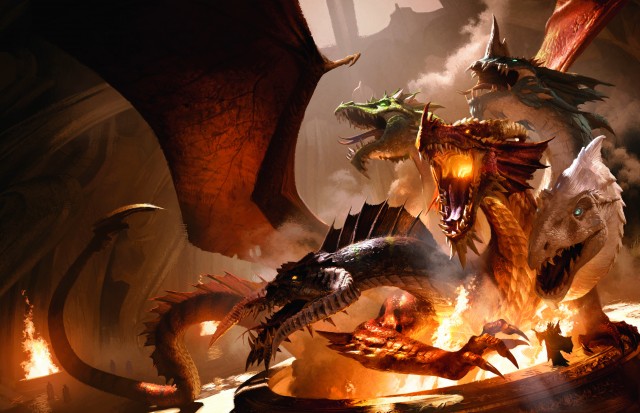 Mike Mearls and Jeremy Crawford, lead designers of the latest edition of Dungeons & Dragons, out in a staggered release all this summer and fall, talk about the mechanics of inclusive gaming, Gen Con diversity panels, realistic artwork, and the decision to “look at the wonderfully diverse group of people who play the game and say, ‘There’s a place for each of you at the game table'” with the system’s new suggestions for roleplaying gender and sexuality.

When Wizards of the Coast released the Basic Rules for Dungeons & Dragons this month, they likely didn’t expect so much coverage to focus on two paragraphs a third of the way through the rules that didn’t contain a single game mechanic. But the company’s direct language on flexible gender identities, intersex gods and characters, and sexual orientation captured the attention of several publications, including this one. While all that attention might not have been expected, Lead Designers Mike Mearls and Jeremy Crawford were making an intentional statement about recognizing the diversity of players within the D&D community. Mearls and Crawford discussed what led them to create this wording with contributor Michael Trice.

Mike Mearls: We really wanted to give people the chance to get creative with the game. Roleplaying makes D&D in particular and tabletop RPGs in general different from other types of games. We wanted the Basic Rules to showcase the traits that make RPGs stand out, that show new gamers that they’ve stumbled into something very exciting, empowering, and novel.

Jeremy Crawford: In a roleplaying game, who your character is can be as important, if not more so, than what your character can do. We wanted the new edition of D&D to reflect that fact in the rules themselves. And we wanted to inspire players’ storytelling about their characters, to give players the raw material that they could use to form a backstory and a personality for a character.

TMS: Can you explain how that wording came about for the Sex entry in Personality and Background?

JC: We knew early on that we wanted the new edition to be inclusive: inclusive of beloved material from previous editions, inclusive of different play styles, and inclusive of a varied cast of characters. We also wanted to be welcoming to as many D&D players as possible, to look at the wonderfully diverse group of people who play the game and say, “There’s a place for each of you at the game table.”

With all of that in mind, I talked with James Wyatt, one of our writers, about crafting the text, which then got tweaked by me and Michele Carter, one of our editors. Mike, our boss, then gave it his blessing. We all felt that including this material was a natural part of the game’s evolution.
The text was meant not only to show the many options that a player can consider when making a character, but also to tease out a gem from D&D’s past: the fluidity of gender among the elven gods.

TMS: In particular, I heard a Gen Con panel helped inspire the wording. Can you tell us a bit more about that?

JC: The Gen Con panel, Queer as a Three-Sided Die, started a few years ago and was organized by my friend Steve Kenson, with whom I worked on several RPG books before coming to Wizards of the Coast. I’ve also participated in LGBT panels at PAX and Emerald City Comicon. The panels have all been well-attended and have been filled with enthusiastic D&D players eager to see the game fully embrace them. Each of the panels has driven home that D&D is loved by people of many different types, and that the game has long been a place to explore identities and to try on different ways of seeing things.

MM: In 2013, Jeremy and I talked about the Gen Con panel over lunch the following week, and I was struck at how the community was surprised that someone from Wizards of the Coast was able to attend. I had always felt that we were a fairly progressive company, but it drove home that people can’t read our minds. Our intentions don’t mean anything unless we reflect them in our work and our actions.

TMS: How influential in general do you find panels and panel feedback in the design process?

MM: It’s very important. One of the big things with the open playtest for D&D was developing ties to the community and making sure that we were in touch with what people want out of D&D. Part of that drives our mechanical design, but we also know that D&D is a social game. It’s critical that we create an environment that’s welcoming to everyone.

TMS: The text in the Sex subsection is fairly short, two paragraphs, but in some ways that makes how far it goes even more surprising. Were there any concerns about directly addressing flexible gender identities, intersex characters, or sexual orientation in the Basic Rules?

MM: Not at all, honestly. Wizards of the Coast is very supportive of diversity. To the team, writing about it that way was the natural thing to do.

JC: Yeah, we were happy to include the material!

TMS: What earlier designers or game rules do you feel helped aid this addition?

MM: I think a lot of RPG designers are in the same place that we were, in the sense that they want their games to be inclusive but don’t always quite get how to do that. Tabletop roleplaying is all about thinking of the world from a different point of view, so I think that the hobby as a whole wants to be inclusive. It’s really just a matter of making that clear, of consciously speaking in inclusive terms rather than assuming that what’s in our hearts will filter into our work.

TMS: The idea of actively inviting players to consider the formation of gender identity as core to the character is fairly common in some gaming groups, but what do you see as the value in placing it prominently in the rules?

MM: Any social change takes time. My personal sense is that I’ve always been much more leery about offending gay and transgender folks by fumbling the issue in an effort to include them. I’m not worried about offending bigots – quite the opposite, in fact. The value lies simply in acknowledgement, and realizing that it’s better to put something out there than remain quiet out of a misplaced bout of sensitivity

JC: Including the material brings value in two big ways: it looks a segment of our audience in the eyes and tells them that we see them, and it encourages our other players to consider the spectacular array of characters that they can create in D&D.

MM: It’s hugely important. Since tabletop RPGs are constrained only by the imagination, it’s important for the game design to encourage creativity. A digital game has to account for every possibility in its programming, something that RPGs get around through their open-ended nature. Even in the future, where AIs might be able to change a digital game on the fly, there’s something to the social element ofD&D that makes it a unique experience. No other game or art form quite captures its essence.

TMS: How much of Personality and Background was informed by the play-testing process?

MM: In the playtest, we saw a lot of people asking for a greater emphasis on roleplaying and storytelling. We also saw that simple, flexible systems and rules resonated with people. The background system is essentially the union of those two requests. I’m 100% sure that without an open development process, we never would have placed such a big emphasis on them.

TMS: Can you give us an idea of the scope behind this play-testing process? Is there a feel for how it compared to 3E and 4E in both scope and focus?

MM: It was enormous. We had over 175,000 people download the playtest through the open process. We also know that in most cases, the Dungeon Master for a group was the only one to download materials. So, it’s possible that over a half million people played the playtest version. Our internal, non-open playtest was at least as large as the 3e test, so take that, add a few hundred thousand people, and you have our 5e effort.

TMS: Given that the designers and writers are predominately male for D&D, exclusively so I believe for the Basic Rules, do you find panels and playtesting effective in informing any concerns that might arise among women who play D&D? Or is that a concern in the design process?

MM: It’s not really a concern in the technical aspects of game design. Instead, it comes through in the graphic design and art direction. What’s interesting is that the majority – almost the entirety – of the team working on the visuals consists of women, with Kate Irwin as the art director. Very early on, we decided that we were going to avoid bare midriffs, cleavage, and other common gaming tropes. We only use those if a specific character would actually dress that way. For instance, our incubus is depicted with six-pack abs and a come-hither smile. That makes sense, because as a supernatural creature of seduction and corruption, that’s how he would present himself in the world of D&D. Fundamentally, we approach the characters we depicted as people. Given a character’s personality or situation, how would they dress? How would they present themselves? It’s about thinking of characters not just in terms of gender, but in terms of who they are. And how they dress reflects that. A lot of that comes through in following conversations online, blogs, and our own sense of how we want to do things.

TMS: Can you give us a top three list of what you’re most proud of in this new edition?

MM: There’s a lot we’re happy with, but I’m probably most proud of how elegant the system has proven in play. It moves quickly, is easy to learn, and really focuses people on the action rather than looking up or arguing over rules. I’m also happy with how the backgrounds have placed a greater emphasis on roleplaying and storytelling.

JC: The new edition is our baby, so it’s a little hard to pick which part we like best! The elegant system is up there for me. And I love that the core rulebooks include so many nods to delightful bits from the game’s long run. Finally, it’s hard not to be proud of the steps we’ve taken in talking about gender and sexuality, and also the steps we’ve taken to depict a diverse range of people in our illustrations. For example, in the section on the human race in the Player’s Handbook, the [illustration representing humans] is a black woman. The illustration makes me smile every time I see it.

Update: We’ve edited the post slightly to use the modern term “intersex.”

Michael Trice teaches at MIT by day and games by night. Okay, he games by night and day. Sometimes they make him teach at night. Yes, even at MIT. He’s written for Dragon Magazine, Blue Devil Games, SXSWorld, and stuff that only shows up on Google Scholar or the bowels of university libraries. You can reach him on Twitter.