Please do not misgender the Eye of the Beholder. 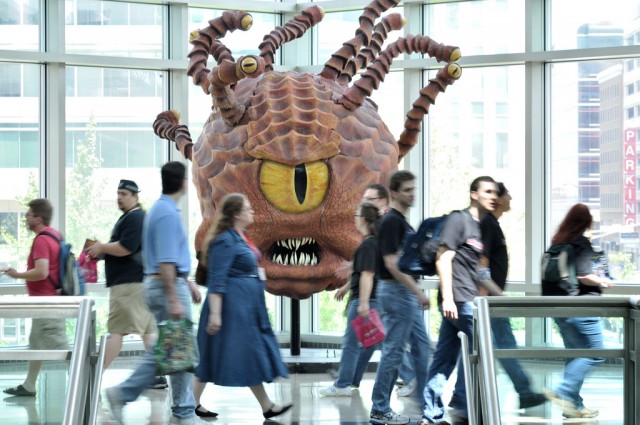 Yesterday, Wizards of the Coast released a set of free-to-download “basic rules” for the upcoming fifth edition of Dungeons and Dragons, with the idea of putting this new version of D&D into “as many hands as possible.” This in itself is pretty rad, but the actual text of the rules are surprisingly inclusive to non-binary players and characters in a way that hasn’t shown up in an official guide before.

According to the website, the basic rules PDF “runs from levels 1 to 20 and covers the cleric, fighter, rogue, and wizard, presenting what we view as the essential subclass for each. It also provides the dwarf, elf, halfling, and human as race options; in addition, the rules contain 120 spells, 5 backgrounds, and character sheets.” Which is awesome, but we’re interested in particular with Chapter 4: Personality and Background (about 33 pages into the PDF), where the rules have this to say about the role that gender identity and sexual orientation might play for your character:

The rules more or less encourage players to experiment with their ideas of their assigned race’s gender roles and with the concept of gender itself, and even bring up the idea that choosing not to identify with a singular binary gender means that you might be “made in the image” of an Elven god.

Of course, it’s not perfect: while the actual text of the paragraph uses the correct distinction between sex and gender, the fact that only “sex” is listed as the header might give readers the wrong initial impression about which terminology to use when. (Although you might argue that this is a good thing, because it’ll inadvertently attract the type of people who immediately think “awww yeah gettin’ laid by hot elf NPCs” and then maybe those dweebs will learn something). And it’s not as if people weren’t allowed to play any type of gender they wanted before–after all, a game of Dungeons and Dragons can be as inclusive and accepting as the people who are getting together and playing it.

However, putting down the idea of non-binary gender in writing (which we don’t remember encountering in 4th Ed. or 3.5’s basic rule set)  is pretty awesome on the part of Wizards of the Coast, in part because talking about differences in gender both normalizes those differences and creates valuable resources for the real-life people who identify with them. It’s not difficult to imagine the long-suffering non-binary nerd kid who’s been unable to put words to their feelings coming across the phrase “”You don’t need to be confined to binary notions of sex and gender,” and thinking, “Hey, that’s me!” Which is pretty great in my book.

While the basic rules are probably all you need to get a rudimentary DnD game together, the accompanying Starter Kit will be available in hobby shops on July 15th.

(Wizards of the Coast, image via Will Merydith)