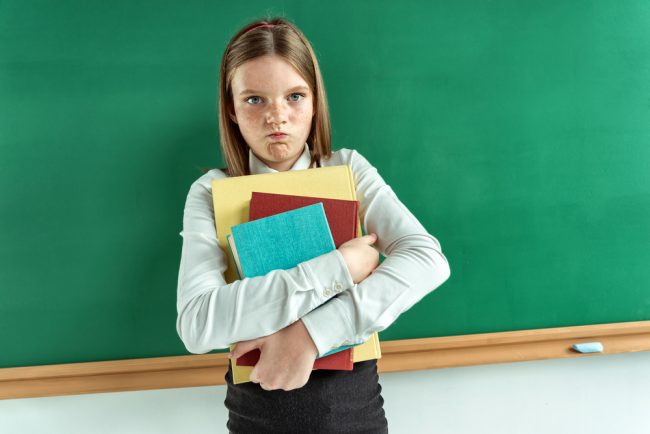 For as long as there have been dress codes, women and girls have been hating them. More often than not, the restrictions placed on women’s clothing are based in nothing but unmitigated gender-blaming, teaching girls from a young age that not only are their bodies a natural threat to boys and themselves, but that the response boys and men have to those bodies is to be considered over the bodies themselves. Add to that the body-shaming that comes with applying blanket rules (hiding cleavage, mandatory skirt & short lengths, tightness, etc) to all bodies without exception, and there’s a lot to hate about gendered dress codes.

Luckily, thanks to the internet, the struggles women and girls face on these issues can quickly and frequently go viral, gathering support and camaraderie worldwide. Every time a girl gets sent home for having fingertips that don’t touch her shorts’ hem, or people criticize the way a woman’s swimsuit fits, or a group of boys feels emboldened enough to publically call young girls derogatory names because their school sanctions the intention behind them–these women and girls, at the very least, know they’re not alone.

And now, this struggle against unfair, sexist dress codes is finally making some headway. And all it took, wouldn’t you know it, is for some people to start speaking up who aren’t women.

Last week, a photo and story went viral about a group of boys at a school in Exeter, England who aren’t allowed to wear shorts to school. The recent heatwave proved miserable to ride out in pants, but the school wouldn’t budge on letting the boys trade them in for shorts. So they showed up in skirts, which are allowed per the girls’ dress code.

Boys at Isca Academy in Exeter wear skirts to school in protest at not being allowed to wear shorts in hot weather. pic.twitter.com/XHrffnSQEN

The initial reaction of “Heck yeah, wear what makes you comfortable!” is followed quickly by the uncomfortable knowledge that this act will make an impact because boys in dresses is still, by many, considered an over-the-top joke of a statement meant to highlight just how ridiculous the lack of options is for boys. Indeed, a quick scroll through the replies on Twitter (never look at the comments!) is a wave of gay jokes and derisive questioning of these children’s masculinity.

The school hasn’t caved yet. They’ve made some hot weather amendments to the dress codes, allowing students to “undo the top button of shirts” and carry their tie rather than wear it. Shorts haven’t been implemented, but the headteacher wrote to students and parents that “with hotter weather becoming more normal, I would be happy to consider a change for the future and will talk to families and staff further about this in the coming weeks.” That’s more than most schools have ever done when girls fight their own dress codes.

Daily Dot points out that this isn’t the only recent progress we’ve seen with dress code battles waged by men and boys. Another U.K. man was sent home from work after showing up in shorts, which are not allowed by his company’s dress code. So he showed up in a dress and voila, official dress code changed to include shorts.

How is it that men in dresses is still, to this day, seen as such an offense that companies and schools will do whatever necessary to make it stop?

How, also, is it possible that when men and boys claim of physical discomfort, their concerns aren’t undermined by assumptions? When they complain of being hot, no one assumes their real aim is to sexualize themselves or distract women and girls from their work and studies. They’re not told their physical comfort is going to detract from the needs of others. They just–get this–are listened to.

That must be pretty nice.