The Mary Sue Interview: Jeff Bridges, Julianne Moore and the Cast of The Seventh Son 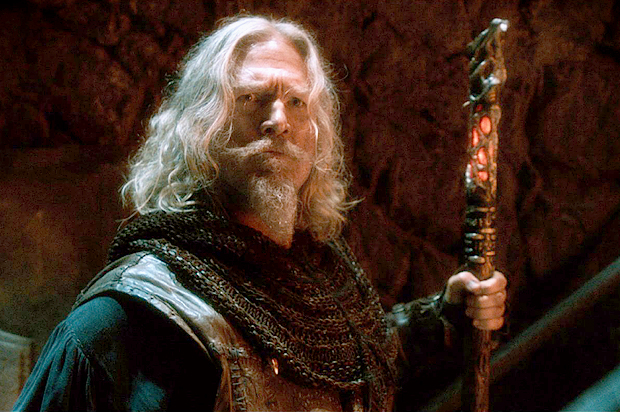 Let’s get this out of the way–Seventh Son is an incoherent movie at best, and a racist one at worst. The film might never attain “first edition of The Iliad“ levels of preposterousness, but that’s not necessarily to its credit; as an audience member, I’d personally rather watch something irredeemably silly than a movie that alternates between being boring and offensive.

That being said, it’s not the cast of Seventh Son‘s fault the movie is a stinker (for more on what stinks and who dealt it, look for our review tomorrow), and at a press junket for the film last Saturday, Extreme Good Sports Jeff Bridges, Julianne Moore, and Ben Barnes were more than happy to talk about their experience working on what Bridges calls “the Big Lebowski prequel.”

Reporter: This film talks a lot about destiny and fate. How much has that played a role in your lives?

Jeff Bridges: Destiny and fate. Any of you guys want to go first on that one?

Ben Barnes: [laughing] Nobody wants to go first on that one.

Julianne Moore: Destiny and fate, I mean, that’s a tough one! I don’t know if I believe in destiny or fate or anything like that. I do believe in desire and luck. I always say to my children, I remember when I was ten years old, I said “I’m going to have two children, I’m going to have a boy and a girl.” And you know, I lined up my dolls and stuff like that, and I had this idea that I was going to have a little boy and a little girl, and I always say to them “look, I got what I wished for.” So I had a desire for something that I knew I wanted, but I do feel like it was lucky that it happened. But in a way, I could reframe it now and say it was destiny. I think sometimes a lot of what we want, we could say it was destiny in retrospect.

Bridges: If I can stumble into an answer, this is just my, as The Dude might say, it’s just my opinion, man. You know, you got the universe, right, you got all those black holes and the whole deal, all this stuff you don’t know about, but here we are, right, and somehow the universe has, we’ve come out of the universe, you know. So it’s kind of, you know, destiny I guess or fate in that here we are, and this comes out of–you know, the Big Bang happened, and that resulted in this happening. And here we are, and all of our challenges, all of our dilemmas, can be wonderful lessons for us, teach us.

Reporter: Another element of the film in Jeff’s case and Julianne’s case is you guys are kind of like the mentors. Can you talk about taking on these roles as mentors or leaders? [To Barnes] How was it with Jeff being your mentor and your teacher?

Barnes: Well, I can’t give the answer I usually give, because he’s sitting right next to me and it would seem somewhat ingratiating I think, but Jeff was the reason I wanted to do film in the first place, that’s not news to him, but I think he was unbelievably generous. I remember there was a day we were filming  and there was an unbelievable amount of set up time, and we were just sitting there and Jeff was saying, “You were my apprentice in the movie, I think you should be my apprentice in real life, let’s talk about acting.”

Bridges: I remember my father and my brother, I guess they count as mentors, but my mom, too, she would give us some wonderful acting tips, and I was saying to Julie, the ages that you get to work with as actors, there are so many different ages! I thought some of my best mentors have been animals, dogs, and children! Babies! I remember the kid in Crazy Heart, so wonderful just to see how he did this thing, he had no expectations, not being results-oriented, you can learn that from a kid if you’re open to it.

Moore: One of the things that was so great for me when I became an actor was being in a situation where suddenly I would be working with people who were my age, and people who were my parents’ age, and my grandparents’ age, and you felt everything collapse, because suddenly you were a peer with this person. The best thing for me when I was younger was when actors treated me like a peer, so that’s something that I endeavor to do when I work with people, because I just remember that feeling of all those years melting away, it was very exciting. That being said, I also remember when I was on a soap opera years ago, the woman who was playing my mom–you know, I had to throw myself into her arms sobbing, sobbing, I had my face buried in her chest and I’m crying, and on camera she very gently picked up my face and faced it towards the camera, and at the end of the scene, she was like “the lens can’t see you if you can’t see the lens, darling.” And it was so generous! It was so incredibly generous that she went out of her way to put my face in the lens, and I’ve never forgotten it.

Reporter: Jeff and Julianne, it’s been nearly two decades since you were together in the Big Lebowski.

Reporter: What is it like to be together again, and how would you also compare and contrast your relationships in the two movies?

Moore: It’s been seventeen years, and I have the little Lebowksi to prove it, right?

Bridges: That’s right, and that wasn’t method acting, was it?

Moore: That’s right, I was pregnant, I actually got pregnant on The Big Lebowksi  -it’s not Jeff’s – my son is seventeen years old, so that’s how we know that it’s been seventeen years. Isn’t that crazy?

Bridges: Not many people know this, but I think we’ll just let this out of the bag, that this film is actually a prequel to The Big Lebowski. There are some kind of weird parallels [giggles]. The Dude liked to smoke it, drink it, and Gregory [Bridge’s Seventh Son character] he likes to, I’m sure he’s probably got some kind of smoking mixture that he’ll enlighten you on. There’s probably some similarities, I hadn’t really thought too much about it, but now I will.

Moore: I mean, it was just so great to be with Jeff again, not only do we kind of drag our relationship along as people and actors, but I think the audience does too, so there’s that sense of, “Oh, I know those guys, they were in a movie together before!” So that kind of comes along with you, and it was something that I hadn’t really anticipated, and it’s cool.

Bridges: Positive baggage, kinda. Even doing what we’re doing here now is kind of the same thing! It’s just being together.

Reporter: Julianne, you are at least a Golden Globe and SAG winner now [for Still Alice], and you are heading towards the Oscars, so I would like to know how do you prepare for the red carpet for this huge event. And Jeff, how do you advise your friend how to go into this huge red carpet event?

Moore: First, I take a bath. And then I tie my tail up! Um, you know, yeah. I try to take everything one day at a time, it’s been such a wonderful surprise, and so exciting for us. I’m just trying to take it one day at a time and stay as clean as possible.

Bridges: Keep that tail under control! I don’t really know any advice, we talked about it, we acknowledged the emotions of having all that appreciation come at you like that. We talked about it, not too much advice, really: “Hang on, babe! Go for the ride! Surf that big wave!”

Reporter: Coming back to that tail for a second, could you talk about the physical challenges of these roles, and the part that the costumes played in making you feel part of this world?

Moore: Oh, golly, our costumes were tremendous. Not only did I have a tail, but I also had these bones that came out the back, a spine thing, feathers, contact lenses, special makeup, big shoes…the most daunting part I think for me were the costumes, to kind of try and pull that off. Jackie West’s costumes actually made the characters for me, it was such a thrill to get to do that, and Dante Ferretti’s beautiful sets, and that whole, fantastical world that they created gave us so much.

Bridges:  That’s one of the wonderful things about what we’re up to, making movies, is that it’s a collaboration of all these artists. You get people like Jackie West, who is just focused on how your guy looks, and why he looks that way, and all the history of all that. Fortunately one of the early things you do when you’re making a movie is you meet with the costume designer because it takes a while to get all her stuff together, especially in a movie like this. For me, that’s really instrumental in trying to figure out who my guy is, and what that looks like, and as you start to put the stuff on, you look in the mirror and you go “yeah, yeah, yeah!” And then the sets, you know, Dante Ferretti, God, I was imagining great things and every time I’d see one all my high expectations were transcended.

Bridges: Well, part of the way I work, what are they, psychics? Those guys, I remember someone called Ramtha, do you remember Ramtha? This woman, she’d [imitates meditating as a psychic]. Certain characters, maybe it’s all characters, I kind of invite them in that way, you never know how it’s going to work out. We mentioned Jackie West and Dante Ferretti; someone who I worked with for many films now is my makeup guy, Thomas Nellen. And I had this idea, it’s kind of a silly idea, to wear these weird teeth. Like I figured, you’re in the Dark Age, you’re not going to have good teeth, so I wore these teeth which you couldn’t see at all because of all that hair but that made me slur a little bit.

Barnes: And also about twice a day he’d be like, “Oh wait, my teeth! I don’t have my teeth!”

Bridges: So, that’s a truthful answer, I guess. One of the things I was hoping the film could convey, is that rather than the traditional battle between good and evil, that it could go a little deeper than that. In my research I came across this quote I’ll read to you by Aleksandr Solzhenitsyn, and I knew we had a Russian director [Sergey Bodrov], I told him and he said of course, that’s exactly right, let’s do that. [The quote is]: “If only there were evil people somewhere, insidiously committing evil deeds, and that it were necessary only to separate them from the rest of us and destroy them. But the line dividing good and evil cuts through the heart of every human being. And who is willing to destroy a piece of his own heart?” And I’m hoping that is in the movie somewhere.

[This interview has been edited and condensed.]