Seventeen Magazine Says No More Photoshop, Courtesy of the Work of a Fourteen Year Old Girl 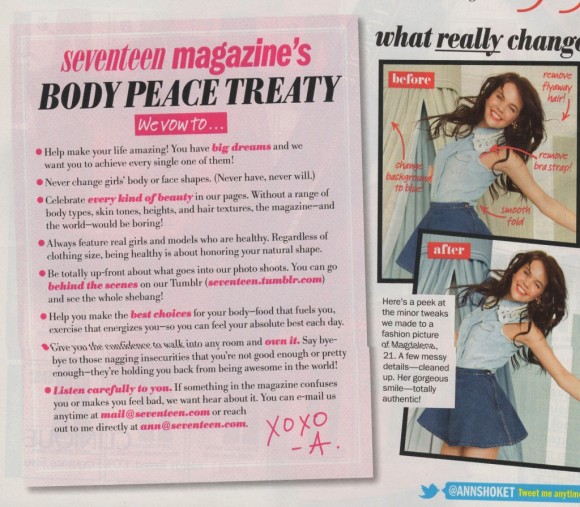 The battle against photoshop in women’s magazines is not new; it’s been waging for decades, and has become especially heated in the last ten years. For the most part, though, the forces on either side of the debate have been in a stand-off for some time, sometimes nudging towards acknowledgement of the other’s validity, but never really getting anywhere long-lasting. When it comes to Seventeen magazine, that paragon of idealized (read: airbrushed) teen splendor, it fittingly took an actual teen voice (and the voices of the 84,000 people who stood behind her) to break through and take what could be one small step for the human image, one giant leap for Seventeen magazine.

The teenager in question, Julia Bluhm, is a fourteen year-old from who launched an online petition on Change.org with the help of the SPARK Movement (“a girl-fueled activist movement to demand an end to the sexualization of women and girls in media”). The petition asked Seventeen to include at least one “unaltered, photoshop free” spread in every issue.

As Bluhm said in the petition:

I want to see regular girls that look like me in a magazine that’s supposed to be for me. For the sake of all the struggling girls all over America, who read Seventeen and think these fake images are what they should be, I’m stepping up.

At first the magazine responded with a sort of “good job kid, better luck next time” approach, but things seem to have changed now. Revealed in their August issue, Seventeen published an eight-point “Body Image Treaty,” pledging their commitement to “celebrat[ing] every kind of beauty.” This includes, according to their vow (which can be seen in the image above):

This is, in a way, completely revolutionary from such a large, glossy publication. We are still obviously in the early stages of this declaration–and as such there is no way as of yet to hold them to their promises–but it certainly feels like a win to me. Baby steps are important, after all; and this one may even turn out to be a stride.

How this will manifest within the magazine itself is of course yet to be seen; but for today let’s celebrate the fact that, for once, the seemingly looming shadowy editorial figures behind one of the world’s most influential women’s magazines has agreed with something pretty darn important: That we all need the chance to see ourselves reflected in the media in unharmful ways.