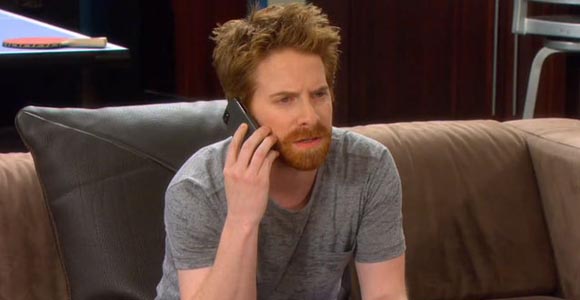 Yes, it’s true. Some actors are nerds and have strong opinions just like us. In this instance, Seth Green has a few things to say about the next Batman actor.

The former Buffy the Vampire Slayer star was recently interviewed by Larry King and asked his thoughts on the casting of Ben Affleck as Batman in Zack Snyder’s Man of Steel sequel. You may remember I was pretty angry after hearing the news (the internet had varied reactions). Turns out, Green isn’t too thrilled with the choice either.

“I guess it really depends on what Batman you’re playing, and I think that comic book fans have gotten used to the idea that modern, mainstream is accepting of interpretations of this characters with more gravitas. You know we’re past the time of Adam West’s kind of goofy interpretation of Batman,” he initially told King.

Green mentioned he loved Michael Keaton (who recently reminisced about his time as Batman) in the role, doesn’t think George Clooney got a fair shake, and thinks Christian Bale was great in the part. “You gotta remember that at the core of that character, Batman’s a crazy person. Batman has no powers,” he argued. “Batman is a rich, screwed up kid whose parents were killed in front of him who, with his money and insanity, decided to become a vigilante symbol to combat darkness.”

So what’s his actual argument against Affleck?

The notion of Superman versus Batman or Superman and Batman is, that’s a long-standing thing in the comics. It’s a long-standing thing in the comic. When they were in the Justice League together, the most common bump between them is that Superman is like, ‘I won’t ever kill people,’ and Batman is like, ‘Well you do whatcha gotta do.’ And they bump heads a lot. If this movie is meant to be the idealistic alien, humans before all else Superman, and this is supposed to be the grizzled, weathered Batman who’s been living in Gotham, fighting crime himself for 10 years, you need a guy who’s older, you need a guy who’s got more weight, and you need a guy that a Henry Cavill Superman is gonna be actually scared of. You have to remember that Batman is just a dude. He’s got no powers. So the fact that Superman is scared of him, says something about the gravitas that he carries. And it’s not just because he’s willing to kill. He’s scary.

But, King interjected, “Affleck is a very good actor, and you’re supposed to act.” Green replied, “Yes, but, there is only so much that you can act a role before people are or are not going to believe you in that role. I’m never going to play, um, you know, an MMA fighter, because I’d step into the ring with an actual MMA fighter like Batista and I wouldn’t look correct. So there is a physicality of it.”

Some in Hollywood have certainly come out in support of Affleck. Joss Whedon for one, Batman films producer Michael Uslan for another. I’m still not happy with it but it’s “wait and see” mode now. If you’re interested, you catch watch the entire Green/King interview on Hulu.