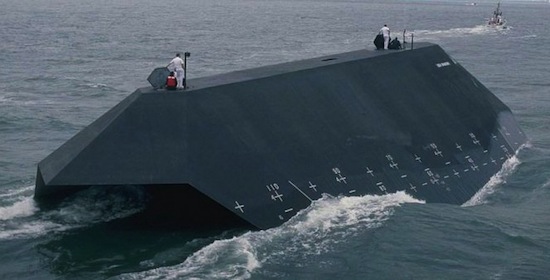 If any of you out there were still holding out to buy the first ever stealth ship, then your boat has set sail. The IX-529, or Sea Shadow to its friends, has been sold for a measly $2.5 million. Sadly, the once top secret experimental vessel won’t be plying the seas anymore: It’s headed to that big scrap heap in the sky.

Originally built in 1985 by Lockheed Martin, the Sea Shadow was intended to test whether the same technologies that spawned the F-117 Nighthawk stealth fighter could be applied to naval vessels as well. Built in secret for $50 million, the Sea Shadow demonstrated that it could not only evade radar and sneak up on other ships, but that it could survive intense storms thanks to its twin-hull design.

Finally unveiled to the public in 1993, the Sea Shadow never went into production and was little more than an (extremely cool looking) experiment. Interestingly, its fate intersected another storied secret naval craft, the Hughes Mining Barge or HMB-1. A submersible drydock barge, the HMB-1 was used to house the Sea Shadow during construction, and ferried the secret boat to and from sea trials far from prying eyes.

For the HMB-1, its time with the Sea Shadow was an encore career. It had already made its name being used in Project Azorian (incorrectly referred to as “Project Jennifer”), a top secret CIA operation which raised the downed Soviet submarine K-129 in 1974.

With limited space onboard and no real practical use beyond experimentation, the Navy attempted to give the Sea Shadow to any interested museum. However, they found no takers and the two craft were sent to the Suisun Bay mothball fleet. Then in April, the  General Services Administration’s auction site listed the two craft for sale for an opeing bid of $100,420 under the condition that the Sea Shadow be scrapped.

“We don’t think we’re going to make money on Sea Shadow at all […] In fact, it would have been wonderful if we could have just floated it out of there and given it to somebody.”

The HMB-1, however, is free to be repurposed which the Bay Ship & Yacht Co. apparently intends to do. According to the Bee, HMB-1 will become a floating drydock for servicing ships.

But though the Sea Shadow will be gone, it will sure not be forgotten. It will live on in our dreams, in our memories, and as the inspiration for that stealth ship in Tomorrow Never Dies.