Study: Q is the Worst Letter in Scrabble or Words With Friends, S the Best 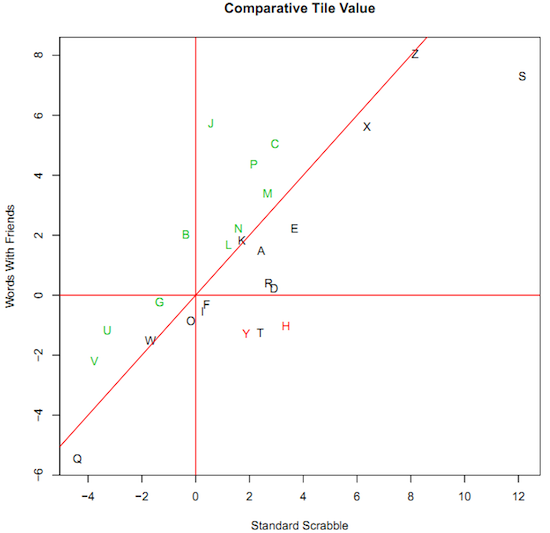 While Scrabble has been around for years, the popularity of the Facebook-based game Words With Friends has sparked a new round of interest in the game. Though for most, either game functions solely as a means to make you feel like your four-year English degree was a waste, or to destroy friendships, Andrew C. Thomas was more interested in a statistical analysis of the game. Using millions of simulated games, his work sheds new light on strategies to play the game, and on how letter tiles can be more than they seem.

To carry out his work, Thomas played millions of simulated Scrabble games on a program called Quackle. His work with simulated games has provided a surprising, but startlingly logical conclusion: That the random drawing of tiles is a huge equalizer in the game. According to Thomas, without a predetermined tile order, a first-time player can beat a seasoned champion. In order to remove this element of randomness from the game — and from his research — Thomas used an alternative form of play.

In his work, Thomas presents an alternative method in which players are given predetermined letter tiles, and both draw from a predetermined reserve of tiles which are laid out in a particular order. In this scheme, player 1 draws from the front of the reserve and player 2 from the rear. Thus, both players are more likely to receive the same tiles regardless of word length.

This pre-determined tile scheme was used as a key piece of Thomas’ simulation research, where he ran 10,600 tile orders 100 times each. This led to several intriguing conclusions about what letter tiles are actually worth. Using these millions of game simulations, Thomas assigned new values to the letter tiles. These take into account the inherent worth of each tile, the number of possible words that can be made, and the likelihood that the tiles will hurt the player if they are unplayed at the end of the game.

For instance, Thomas concludes that the “Q” tile is the most dangerous tile, worth -6 points. Although it does impart 10 points, it greatly reduces the likelihood of scoring a “bingo” — that is, a play in which all seven tiles are used, thus scoring an additional 50 points on top of word score.

“X” and “Z” on the other hand are worth about 3-5 more points to a player than their face value. Like “Q,” these are high-scoring, challenging tiles out of the bag, but Thomas writes that their limited number of bingo-words is made up for by their ease of use in shorter words.

“C” and “V” are particularly troubling letters since there are no two-letter words that can be made using them, thus limiting their value. But Thomas’ research showed stark differences between the two letters, especially when comparing Scrabble to Words With Friends. “V” is a huge potential drain in both games, but “C” is more valuable. In fact, startlingly more valuable in Words With Friends.

The letter “J” is another place where Words With Friends butts up against Scrabble. Thomas found that in Scrabble, the tile has a near-negligible effect on scores, but is one of the most valuable letters in Words With Friends.

Far and above the most valulable tile in either game is “S,” simply because of its low score inherent value, which means its a low-risk tile to have unplayed at the end of the game, and its pluralizing power. In Thomas’ work, the letter is an outlier on the extreme end of valuation, well outside the norm.

It’s likely that much of Thomas’ work is old hat to professional Scrabble players, but could be useful for casual and novice players looking to up their game. The suggestion of a new style of play that reduces randomness could, however, appeal to hardcore players searching for a more competitive game. His comparisons between the two word-building games is also useful, especially for people like me who have been turned off by Scrabble as Words With Friends has significant changes to the game designed to make it more engaging.

By far, the most fascinating piece of Thomas’ research is the automation of millions of games. This gives an entirely new perspective on the game, and provides the data to back it up. With simulation tools now easily obtainable to any board game geek, who knows what new, game-ruining insights could be coming down the pike?