Don’t Believe In Ghosts? Scientists Are Working on Making Their Own 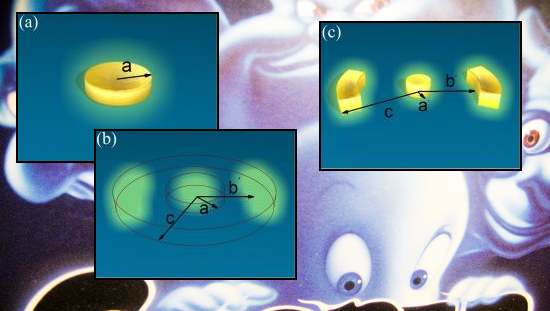 Despite the popularity of paranormal phenomena — in the movies, on reality TV, or in real life research teams — there remains no solid proof of the unseen. Namely, ghosts. Most visual reports of ghost sightings are dismissed as optical illusions, a trick of the light, or the subject perception of some natural phenomenon. So why keep looking for them when we can make our own? In a breakthrough at the National University of Singapore, scientists may be able to engineer ghosts.

Although let’s be clear. We’re talking about “ghosts,” specifically in quotes. Objects obscured or hidden by scattered light, not incorporeal spirits of the dead. At least for now. So we still need to leave Class 5 free-roaming vapors to Venkman, Spangler, Zeddemore, and Stantz.

In any case, Dr. Qiu Cheng-Wei and his team at the Department of Electrical & Computer Engineering at NUS don’t want to bust ghosts anyway. They’re creating their own through “optic scattering and metamaterials” (not naturally occurring). The technology is a bit vague at the moment, and though it’s not available yet, Dr. Qiu’s paper is called “Creation of Ghost Illusions Using Metamaterials in Wave Dynamics,” and it will clarify the principles when it’s published in March.

Okay, to what end? They’re not looking to scare librarians with faux-ghosts but use it to develop new microwave and optical devices in the fields of detection, communication, and cognitive deception. Like a lot of science, the application possibilities are vast, but for now, the scientists have defense and security in mind: Camouflaging aircraft or detecting the undetectable.

As our work solves several major issues associated with “ghost” illusion, we believe it will pave way for future applications of advanced optical illusion, camouflage, and cloaking—in an interestingly new sense. Our work has enormous potential to enhance our ability to mould, harness, and perceive wave at will. I believe it can stimulate new thoughts of realising something extraordinary that is counter-intuitive.

Which is awesome, when you think about what could be done with engineered illusions and optical misdirection. This is not about Jacob Marley at all, but about harnessing the “magic” of J.K. Rowling’s invisibility cloaks or D&D‘s displacer beasts. 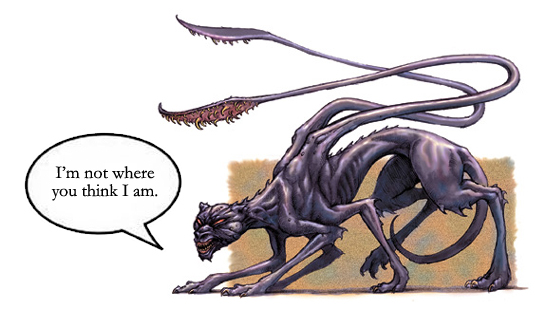 It’s about hiding an object altogether from the naked eye (or from a radar), making it appear somewhere else, creating multiple “ghosts”  in different locations, or even making it appear like something else.

Like all cool advanced technology, we just don’t want it falling into the wrong hands, right? Hollow Man comes to mind, or Patrick Lee’s Breach Trilogy. Or Iron Man, or Iron Man 2, or The Dark Knight Rises, or….

(Phys.Org, images courtesy of Advanced Functional Materials, .imelda, and Wizards of the Coast)