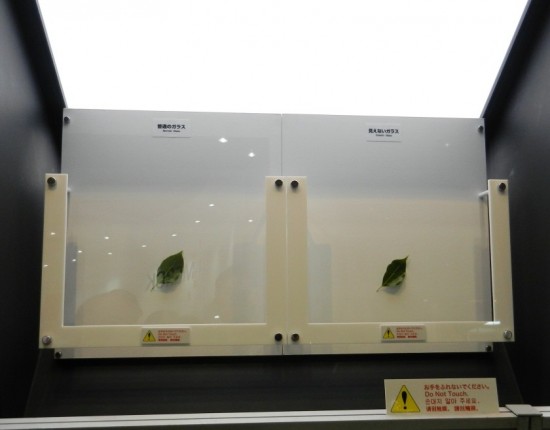 Nippon Electric Glass has developed what it calls “invisible glass,” a type of glass that reduces the reflection of light, thus appearing clear rather than a bit reflective. Nippon put a special type of anti-reflection film on either side of the glass substrate, increasing the amount of light that passes through it from 92 percent to 99.5 percent, leaving only 0.5 percent of light to reflect off of the glass — much less than the previous 8 percent that would normally reflect.

Nippon Electric claims that the luminous reflectance of the substrate is 0.1 percent (or lower), and the anti-reflection films they used to help them achieve this ridiculously low number uses a total of 30+ layers, with the thickness of each layer controlled to the nanometer. As one can see from the above display, the glass seems actually do what Nippon claims, though its uses may be smaller than one would theorize. It could be useful for any kind of electronic display, like a computer monitor or smartphone, but a sliding glass door? People walk into those enough as it is without the glass being practically invisible.