Small Shark Can Glow And Become Invisible, Is Not A Mutant 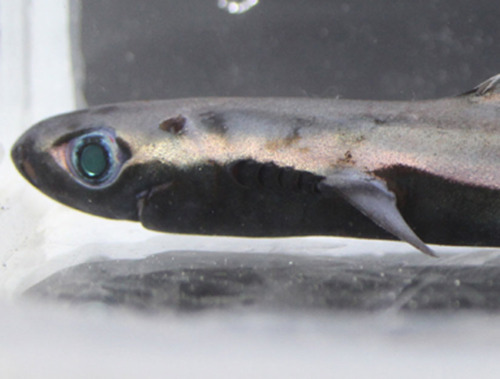 The first in-depth study of the splendid lantern shark, a rare type of dogfish shark found mostly in the East China Sea and off the coasts of Taiwan and Japan, has revealed that the shark can glow in the dark and go “invisible.” Both of these abilities are naturally occurring biological processes.

The ability to glow, and hide itself in an invisibility “cloak,” are controlled by light-emitting organs called photophores. Many species glow using bioluminescence, but coupling with the invisibility is particularly interesting. To become invisible, the photophores replace the down-welling light from the sun, which is absorbed by the shark’s body. The silhouette of the shark then disappears when it is viewed from below. This is useful to help the shark hide from predators, staring up at it from the ocean’s depths.

The research, accepted for publication in the Journal of Experimental Marine Biology and Ecology, was led by Julien Claes, a researcher at Catholic University of Louvain’s Marine  Biology Lab. The researchers collected and maintained in captivity, three splendid lantern sharks for their study.

Analysis of the shark’s abilities showed that each one has nine distinct zones in its body where light is emitted. Some of these zones, like the ones on the shark’s sexual organs, flanks, tail, and pectoral fins, are brighter than others. This is because these areas are used during schooling and sexual communication. Claes told Discovery News:

“Sharks use internal fertilization, so the presence of photophores on the sexual organs may facilitate mating. Moreover, it might also be a way for the sharks to signal that they are ready to mate or that they are a better candidate for reproduction in a light-induced sexual selection system.”

According to the researchers, the photophores are controlled by nerves and hormones, and pigments moving in cells also contribute to the process. The researchers suspect that the luminescence ability evolved when the sharks moved into the deep sea sometime during the end of the Cretaceous period some 65-75 million years ago. Today, the splendid lantern shark lives at a depth of about 656-3,281 feet, typically in areas with extremely low light. Claes says:

“Unfortunately bioluminescence is a soft-tissue phenomenon that leaves no, or extremely few, fossil tracks. It is therefore very difficult to establish if a lot of prehistoric animals were luminous, but it is probably the case at least in the deep sea, since bioluminescence is currently widespread in this environment.”

The new study is the most detailed analysis of the splendid lantern shark and its abilities to date, however, there are at least 33 other species that exist in the same shark family. The researchers say much more work remains to be done to see how the ability to manipulate light affects these creatures.

(via MSNCBC, photo via Discovery News)