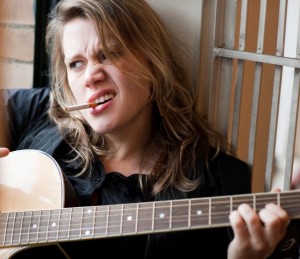 Well, this is awesome news for anyone familiar with the New York comedy scene, and for anyone else who wants to see the following: more funny people on Saturday Night Live, specifically more funny women on Saturday Night Live. Kate McKinnon, who was among seven potential cast members being looked at as an addition to the ensemble, is the lucky lady who will get to show off her wide variety of character skills on the show, and she won’t have long to wait! McKinnon’s first appearance will be next Saturday, April 7 when Modern Family‘s Sofia Vergara is the host. Find out where you’ve seen her and also, we’re going to show you an awesome web series about a lady mag.

McKinnon, who is a fixture at the Upright Citizens Brigade Theater in NYC, is best known for her role in LOGO‘s The Big Gay Sketch Show, in which she played characters including Fitzwilliam, the boy who wanted a vagina. She is also a member of the Maude group Gramps and a regular cast member in the aforementioned awesome web series Vag Magazine:

She also did a voice on The Venture Bros. (Nikki Fictel), which instantly makes me even more excited. Splitsider has a great collection of her other characters, including Fitzwilliam.

Something notable about McKinnon, pointed out by After Ellen, is that she will be the first out lesbian to be a part of the SNL cast. The only other openly gay cast member has been Terry Sweeney, who was part of the cast in its 1985-1986 season. (If there has been another one since, I can’t think of him, and I’m kicking myself for not remembering. If there was one, please fill me in and I’ll amend this.) We know there have been plenty of gay-themed sketches performed by straight cast members, so it’s about time there was a little bit of diversity. (Though we’re sure there will be plenty said about McKinnon not being the female black performer the show desperately needs. But anyway, one step at a time, and there’s always room for more.)

The big question that McKinnon’s casting is raising, however, is what this means about long-time cast member Kristen Wiig returning next season. Ever since Bridesmaids, for which Wiig was nominated for a Golden Globe for her performance and an Oscar for her screenplay, it’s pretty clear that she has proved herself “ready for primetime” — and the big screen. Also worth mentioning is that her contract ends at the end of this season, so many are predicting that this is the perfect time for her to announce her departure. It will be the end of an era for an amazing comedian, but can we really blame her for being ready to move on?

But that’s all speculation. In the meantime, it’s time to get excited about Kate McKinnon. Because she’s awesome, and if she’s given enough opportunities, she could be amazing. Congratulations, Kate!

(via Jezebel, Deadline, After Ellen)

Previously in Women in Comedy