Not All Canceled Shows Are Prime For A Kickstarter Says Terminator: The Sarah Connor Chronicles Creator 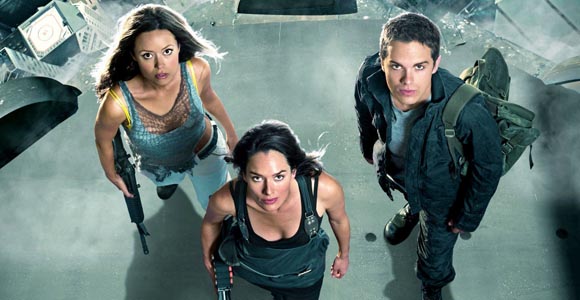 This story is very relavent to my interests considering I just started a rewatch of Fox’s Terminator: The Sarah Connor Chronicles and have been re-lamenting its early demise. With the huge success of the Veronica Mars movie Kickstarter, everyone is wondering which fan-favorite will be next to get a new lease on life. Could TSCC be one of them?

Since the Veronica Mars Kickstarter was announced, we’ve heard from a few creators on how it could affect their old projects. Of course everyone was screaming at Joss Whedon about Firefly but he was all, “Hey, I’m kinda busy at the moment, you know?” Then Pushing Daisies‘ Bryan Fuller chimed in the possibility of reviving that franchise but figured out it would take a lot more than $2 million.

So what about Terminator: The Sarah Connor Chronicles? Considering that show relied a great deal on effects makeup and CGI, I’d guess it would be out of the question for a fan-supported Kickstarter. But what did creator Josh Friedman have to say?

All u asking about a TSCC kickstarter…rights situation, budget necessities, motivation of corporate entities make it HIGHLY unlikely.

To be fair, the rights to the Terminator franchise have been all over the map lately and the last we heard was a Terminator 5 movie was still happening.

Friedman also tweeted, “I could hand @AnnapurnaPics $15mil and it’d be about $150mil short of what they want to do. They want to make Terminator movies, not TSCC…Kickstarter is irrelevant to the TSCC conversation. A TSCC movie runs counter to the interest of the rights holders as they see it.”

“Appreciate the emails/tweets, etc. But VM a very different deal. Again, thx for loving the show. But I think what u got is what you got,” he later added, “I know it’s harsh but I can’t imagine a scenario where there will ever be more TSCC in any form. We have what we have.”

Bottom line is, just because VMars fans wanted a VMars film and made it happen, doesn’t mean fans are going to be able to get everything they’ve been wishing for. Also, if you’ve never read Friedman’s blog post about the effect TSCC demise had on him, I highly recommend it. It’s heartbreaking but really shows how extreme passion can have no affect on Hollywood executives.