Lizard-Inspired Robot Can Sprint Over Loose Sand With Ease 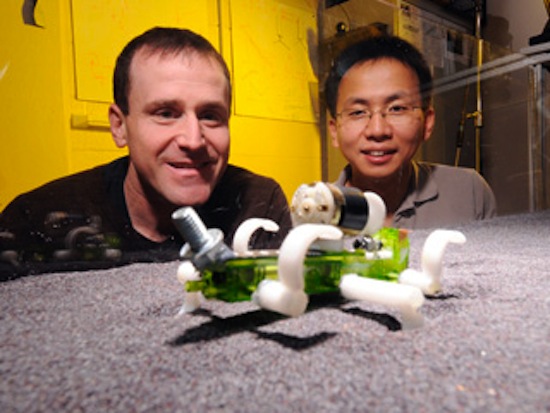 If you were to gather up all the recent robots inspired by designs found in nature, you would have a pretty awesome robot petting zoo. The newest addition to it might be this bot designed by engineers at the Georgia Institute of Technology, which takes its cues from desert lizards who can move without trouble over loose, tricky terrain like sand dunes. The team behind the bot hopes its means of locomotion could one day help a new generation of of rover robots get around alien planets quickly and easily. Keep reading to get a look at the new design in action.

According to results published in this week’s issue of Science, the robot can move over loose terrain at speeds as fast as 2 feet per second. That’s not as quickly as a real lizard can scamper over the desert surface, but it is a respectable start for a robot with a whole new leg design. The Georgia Tech team came to the shape of the legs — which work a bit like backwards scoops — after testing the performance of a variety of leg shapes over sand, small glass beads, and even beds of poppy seeds, suggesting that the bot could maneuver pretty quickly through a bead store or bagel shop as well, if called upon to do so.

In addition to designing new robots, the Georgia Tech engineers are hopeful that learning more about what leg shapes are the most effective at moving over granular surfaces could help other researchers learn more about the evolution of those shapes in animals.

“On the biological side of things, this robot and the associated ‘terradynamics’ help us to understand why animals have certain leg shapes and toes—both now and in the past. We now have a model that can generate hypotheses and predictions about that.”