This Sculpture of a Sumptuous Meal is Made Entirely of Salt 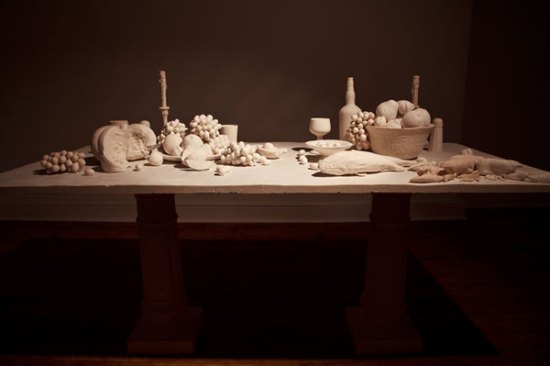 This monochromatic tableau is part of a new exhibition featuring the work of Ken and Julia Yonetani called Sense of Taste, currently on display at the GV Art gallery in London. Modeled after a traditional still life painting, this sculpture presents a decadent meal of cheese, fruit, wine, fresh fish, and lobster. However, it is made entirely out of salt.

At first blush, making a meal entirely out of salt is a clever inversion of the viewers expectations, or just a sure sign that Bender has been cooking again. However, the Yonetani’s work has a very specific message, as the three salts used in the work come from a region of Australia called the “food bowl.” Though it has traditionally supplied most of the country with fresh fruit and vegetables, agricultural irrigation systems are making water in the area increasingly salty. So salty, in fact, that 500,000 tons of the stuff must be removed annually from the region. In that light, the work is a direct challenge to the viewer to consider the impact their life has on the environment. The duo has also created coral reefs made of sugar, symbolizing the deadly impact of silt run off from the sugar cane industry on reef life.

While some might find art with so pointed a message a bit distasteful (pun?), it’s impossible to deny the incredible craftsmanship of these works. Read on after the break for some more choice images.