Even though 2's the right number, but whatever 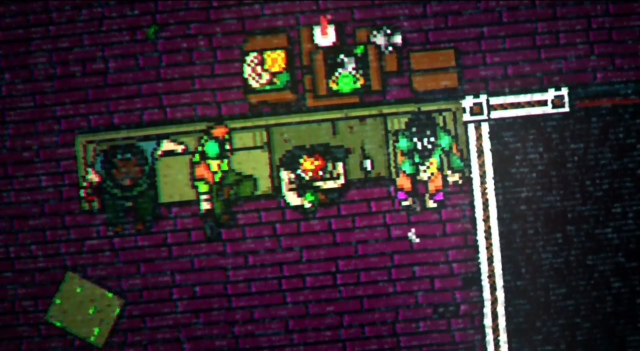 Hotline Miami was the little game that could of last year. Despite being a low-budget, $10 indie game, it managed to steal the hearts of a good number of those that played it, and it ended up on many Game of the Year lists — including my own. It didn’t hurt that it was inspired by the movie Drive, either. Now, Dennaton Games returns with a second and final installment — Hotline Miami 2: Wrong Number.

Wrong Number brings back everything that made the original game so special: The juxtaposition of its bright neon colors with brutal murder, the ’80s trance soundtrack, the retro visuals, and the stylish top-down gameplay all seem to be in play. What’s especially unique about the sequel is the plot — It turns out that the events of the first game were actually a movie, so rather than playing as previous antihero Jacket, you take control of various people inspired by his actions in the film. They’ve now donned animal masks and are going out on their own murderous assaults.

If you never experienced the first Hotline (shame on you), it will be on the Playstation Network next week and is on Steam right now. For those who have, take a gander at the Wrong Number teaser trailer below: