The episode where they try to take a vacation. 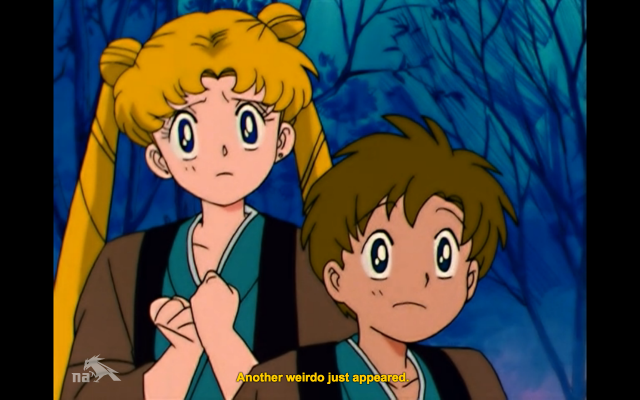 The Dark Kingdom spinner sits lonely in its closet, as the major plot development is propelled by the Tsukino family’s last minute decision to take a long weekend vacation to a hot springs spa. It’s so last minute a decision that Usagi has to leave a note for their cat. 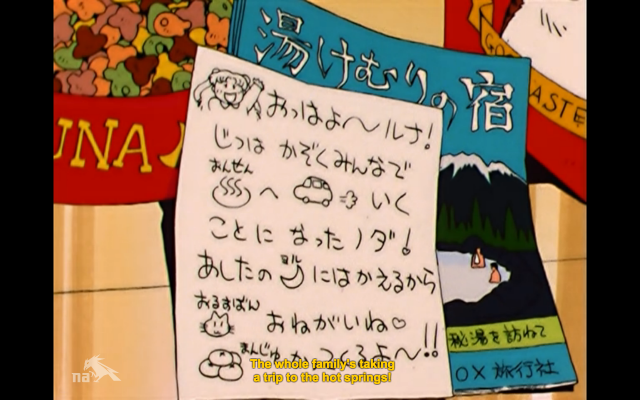 Yes, she leaves a written note for the cat and doesn’t even hide it from her family.

While the episode’s A plot is all about spirit shenanigans, the B plot is a series of normal family scenes with Usagi and the rest of the Tsukinos, as if to remind the audience that they exist, and that despite Usagi’s semi-extraterrestrial origins, they’re still a big part of what makes her her. But these scenes are also about Usagi growing to an age where her parents are worried, or resigned, that she’s going to be drifting away from them as she forms adult relationships. Adult romantic relationships, the episode stresses, as Usagi takes the quiet times at the Lake Yokai (the place that her parents first met) to pine for Tuxedo Mask.

Speaking of pining over Tuxedo Mask, Lake Yokai, the location of the Tsukino’s vacation, has got the A plot buried in it in the form of a spirit that’s been stewing in jealousy for ages and ages. Queen Beryl detects the dark energy coming from the lake and sends Endymion out to investigate, as it’s very similar to youma energy and I guess she wants to see if its a weapon they could use? Then she sends Kunzite out to spy on Endymion, since he’s been “acting strange lately,” which I can only assume is a Dark Kingdom euphemism for “deliberately, openly thwarting all of our plans and goals.” Beryl still doesn’t think that their brainwashing, apparently in the form of erasing all of Mamoru’s memories, could possibly have failed to work.

And this is how Usagi happens to come upon Mamoru walking around the lake. She approaches him and attempts to get him to recognize her, but of course he doesn’t, though he feels strangely affected by the music coming from her locket. He leaves before Usagi’s mom shows up and tells her the Legend of the Lovers of Yokai, which is also the story of the evil spirit in the bottom of the lake, which is also kinda implied to be about a previous incarnation of Usagi, Mamoru, and Rei?????

I mean, the lady in the statue of the two lovers has pigtails just like Usagi and hairstyles are usually enough to pin reincarnations on in Sailor Moon. Anyway, once upon a time a mortal man fell in love with an angel, but the jealousy of another woman who loved him turned her into a monster. The man and the angel used their love to imprison the monster and save his village, but died in the attempt and ascended to heaven.

Yeah, so it definitely sounds like the Dark Kingdom should unleash that monster, which Mamoru does, only to find that the resulting snake lady is no youma. She does what she wants, and what she wants is to kill Usagi. 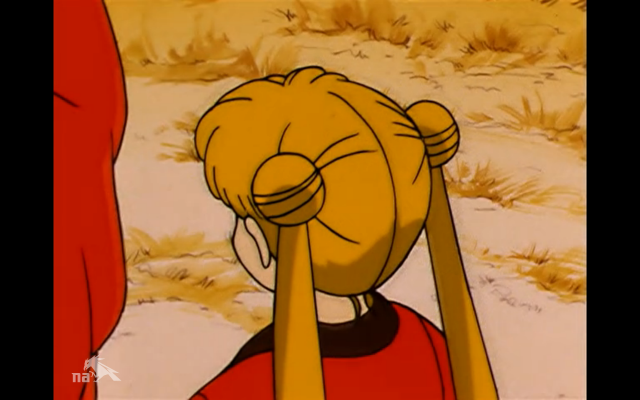 Despite the valiant attempts of Usagi’s dad to protect his clan with a broken branch, Tuxedo Mask feels compelled to intervene in order to “protect innocents.” And just in time, too, because Usagi was on the verge of reluctantly transforming into Sailor Moon in front of her folks. Reluctant to leave Tuxedo Mask without helping him, Usagi nevertheless helps her family limp away from the distracted monster. But what to her wondering eyes should appear but the rest of the Sailor Senshi! 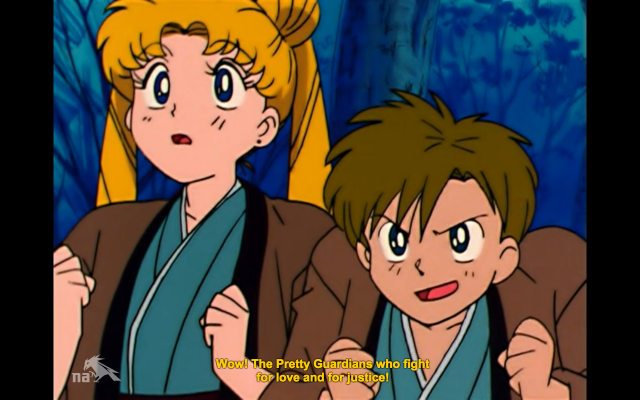 I love any show with young male characters who are invested in female superheroes. (See also: Steven Universe.)

A quick bubble spray from Ami gives the Tsukinos the cover they need to get away, and Usagi the cover she needs to transform. But as per usual for pretty much every enemy in this arc, none of their basic powers work on her. The spirit keeps reforming out of lake algae. But now that the character who dumped skill points into Knowledge Arcana is here, Rei correctly identifies the spirit as a yokai rather than a youma, and vulnerable to her o-fuda. 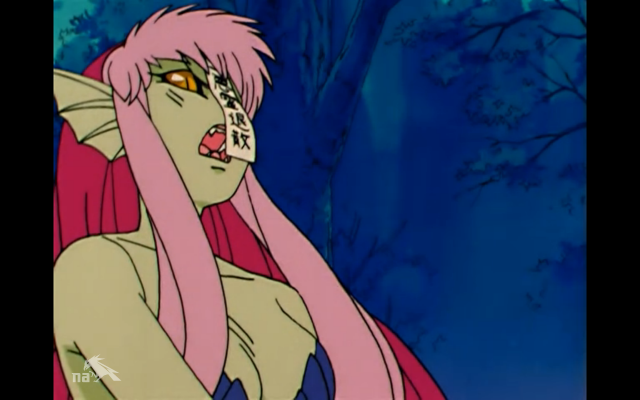 IS THERE SOMETHING ON MY FACE?

Once the yokai has been shut down, a quick Moon Healing Escalation clears it of its jealousy and we get to see its original form as she ascends to heaven. Guess whose hairstyle hers closely resembles? 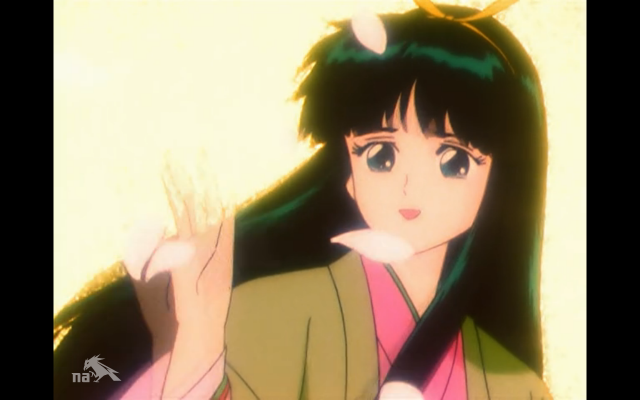 The spirit spends her last moments waving at Mamoru as she ascends, and he waves back. This is another reincarnation of Mamoru, Usagi, and Rei, right? This is how this episode is interpreted, right?

Because he’s a jerk now, Mamoru gets mad at the Senshi for 100% saving his ass, but says he’ll “let it slide this time.” Having watched this entire display of summoning a monster he couldn’t control, and then attempting to prevent it from harming innocent people and needing to be bailed out by his enemies, Kunzite’s reaction is… Tuxedo Mask is an “odd fellow.”

In the denouement proper, Usagi safely reunites with her family, and then enjoys an evening at the hot springs with the rest of the Senshi. Finally, she reaches up to hang a lampshade on the thing I’ve been wondering for ten minutes: why did the other senshi even show up? The answer is “We didn’t want you to have all the fun, Usagi,” and they don’t add “so we decided to butt in on your intimate family vacation!” Then they drown her in the hot springs.

Okay, they actually shove her under the water playfully, but thanks to looping animation and the episodes slow pan of a last shot, it goes on for just long enough that I got a little weirded out.

Okay, so Mamoru wasn’t brainwashed or turned evil exactly, it’s just that his memory was erased! That explains the whole “thinking Makoto was an innocent bystander” bit, and how he could think he’s been allied with the Dark Kingdom but still has a moral compass. However, this also means that the Dark Kingdom had within their hands someone who knew who Sailor Moon was, and they erased his memory of it. Get it TOGETHER, Dark Kingdom.

Does this mean that the Dark Kingdom was responsible for erasing Mamoru’s memories… or killing his parents? I expect to get those answers by the end of this season, Sailor Moon!