The Dark Kingdom... ON ICE 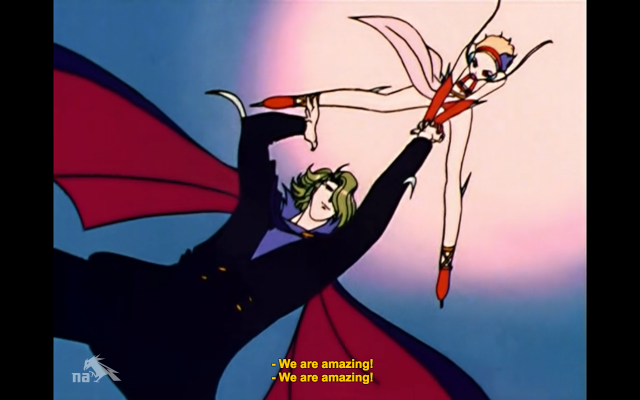 This week in arbitrary standards of princess-ness: ice skating.

Yes, it turns out that the new bar for Usagi to clear in order to be considered to be taking her role as princess seriously is that she should be good at ice skating. This is revealed in a scene of Usagi and Minako watching the performance of Olympic medal winning (and presumably Russian) skating duo of Janelyn and Misha. “Oh yeah,” says Artemis, “ice skating was super popular in the Moon Kingdom, did we not mention that? At all? Ever in the whole series until right now? And the princess was, like, super good at it.” He did not, then, snicker behind his paws about how he’s getting all the Sailor Senshi to jump through hoops.

Come on, Artemis, everybody knows that the only way to tell a true princess is by putting a pea under her mattress.

Meanwhile in the Dark Kingdom, Kunzite is shockingly (not shockingly) talking about using ice skating to lure Sailor Moon and the other senshi into the open. “Your plans are needlessly contrived,” says Endymion. YES. YES THEY ARE. “You should just challenge her head on like I do all the time.” 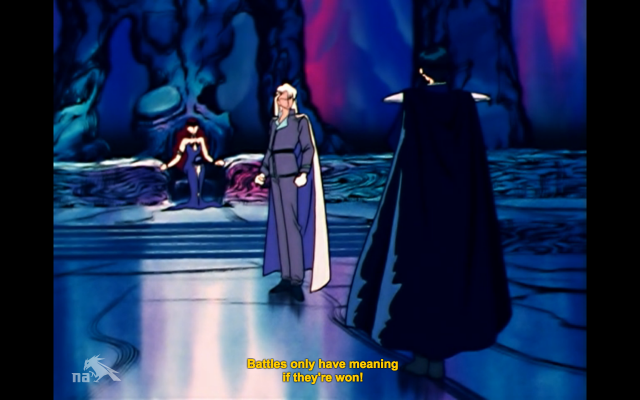 Sorry, Endymion, Kunzite wins this one, go put some ice on that burn. There’s plenty in this episode.

Then Kunzite visits Janelyn and Misha, the skating duo, and tells them to get over their catty relationship drama: they’ve been possessed by his youma and they have a needlessly contrived plan to put into effect. It’s time to open up a suspicious new business and offer a suspiciously generous deal to new customers. Usagi and Minako drag the rest of the Senshi to the brand new ice skating rink that’s offering coaching sessions with Janelyn and Misha as an opening deal. “Okay, but why did you have to bring us,” the other characters ask, and the two spring the most self-aware moment in the whole episode on them. Usagi and Minako are here entirely for Janelyn and Misha, but they point out to Ami, Rei, and Makoto that at this new rink groups of five are given free admission, and that’s totally suspicious so shouldn’t the more responsible members of the group want to check that out now?

Inside, everybody puts on adorable skating costumes and, naturally, among a crowd of screaming girls, the Senshi are picked to go first. It’s no shock that Usagi is terrible at ice skating, reincarnated princess or no, because she’s literally never done it before, but the real surprise here (well, maybe not if you, you know, read the title of the episode) is that Makoto is really, really good at it. 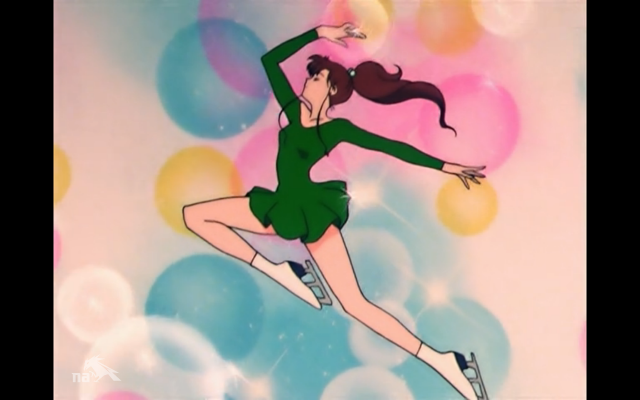 The French judge was unimpressed, though.

She catches the eye of Misha, the male half of the evil skating duo, which is much to Makoto’s liking, as he reminds her of that mysterious guy who broke her heart that we still don’t know anything about. Janelyn isn’t too happy about this, and as Misha approaches Makoto for some one-on-one coaching time, she retires to the secret control booth (complete with menacing Dr. Claw-style chair) that’s scanning all the ice skaters for… silhouette similarity to Sailor Moon? She gets a standard evil message from Kunzite in which she affirms her ability to find Sailor Moon’s secret identity. 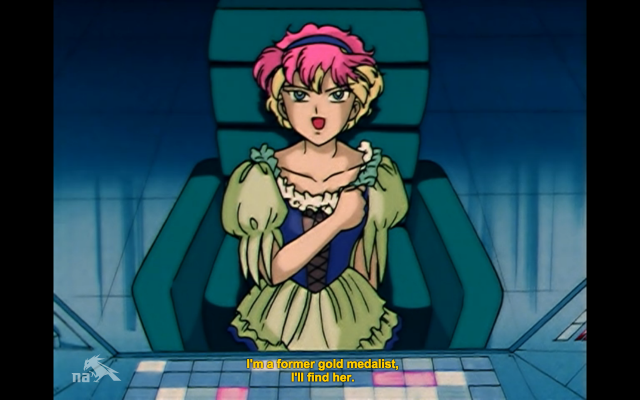 I didn’t know finding Sailor Moon was an Olympic sport. Must be one of the new ones. (Fun Fact: Sailor Moon actually predates the inclusion of curling in the Olympics.)

Then she immediately dismisses Usagi as a possibility due to her extreme clumsiness on the ice. Meanwhile, Misha is doing his own investigations into Makoto… that looks pretty much like flirting. Well, up until Makoto apologizes for being too big of a girl for him to do a skating lift with and instead lifts him above her head. Misha’s reaction: 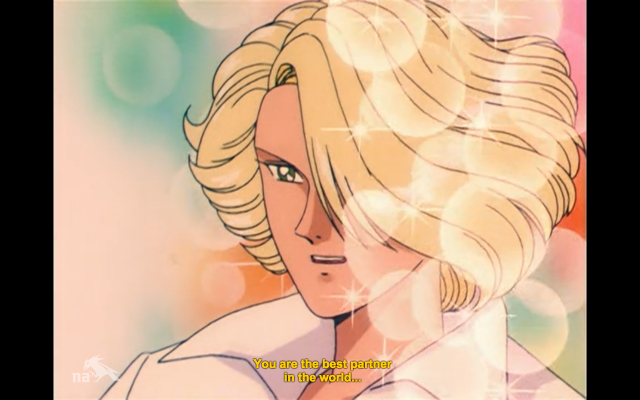 Oh, so what he’s really looking for in a relationship is a dom.

Janelyn’s reaction: SHUT IT DOWN. She closes the rink and goes down to start shit youma style. Minkao, Rei, Ami, and the cats make it out before the whole rink magically seals itself up, but naturally Makoto stayed behind for “special lessons from the coach” and Usagi… well she let everybody go ahead just so she could double back and try to sneak in extra coaching somehow. Remind me again how Usagi isn’t taking being a princess seriously? In her sneaking around, she stumbles across the secret control room with it’s Sailor Moon detector, and now the only character who hasn’t wised up to the Dark Kingdom plot is Makoto.

At least until, in a fit of jealous rage, Janelyn reveals her youma form. “Baby I was just flirting with her to see if she was Sailor Moon,” Misha protests, and transforms with her. Together, they are the synchronous youma Zoilingeller. Then they fuck Makoto up. But no fear! Usagi has arrived and transforms into Sailor Moon Deluxe with Ice Skates Attachment. 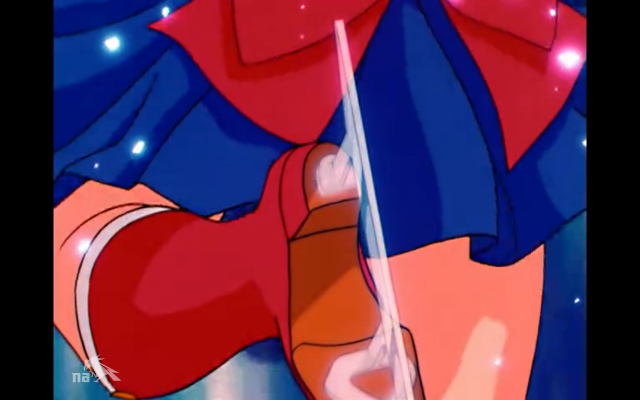 OMG THESE ARE SO RARE I CAN’T BELIEVE I FOUND ONE ON EBAY.

Unfortunately, even transformed, Usagi sucks at ice skating. But no fear! Speed-skating Tuxedo Mask is here! 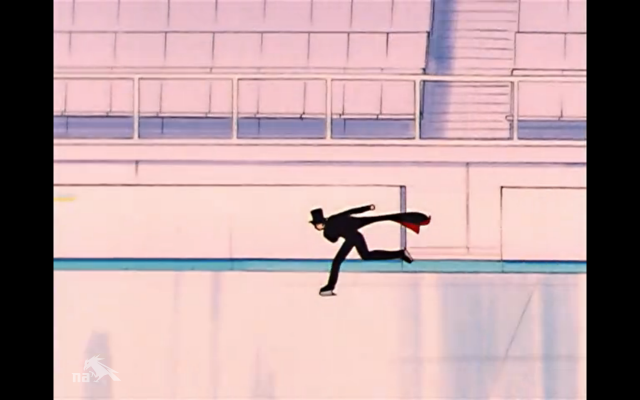 I really hope that somewhere, some skating duo has done a tribute to this episode as part of a really big deal skating competition.

Tuxedo Mask warns Usagi not to get her hopes up: he still wants the Silver Crystal, he’s only intervening because Zoilingeller stooped to harming innocents, by which he means Makoto, so I guess he doesn’t know that Makoto is Sailor Jupiter even though he does know that WAIT A SECOND I JUST REMEMBERED THAT TUXEDO MASK KNOWS THAT USAGI IS SAILOR MOON. Does the Dark Kingdom know that he knows? Ugh, this show and it’s complete disregard for logical flow of consequences where the Senshi’s secret identities are concerned.

Let’s set that aside. Tuxedo Mask’s momentary support imbues Sailor Moon with the confidence to evade Zoilingeller’s attacks even on the ice. 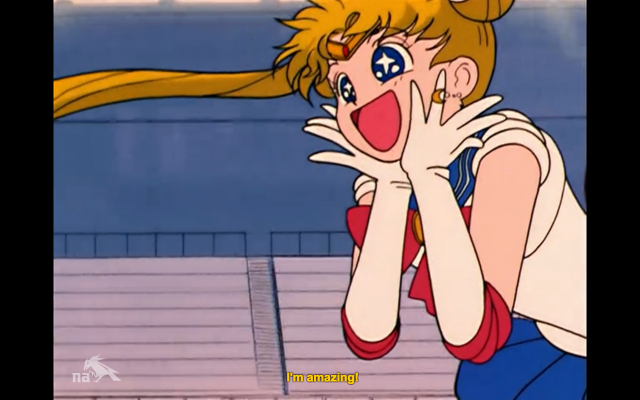 But they’re both eventually laid low by a youma attack, only to be saved by Sailor Jupiter, who’s had a chance to transform. Then the rest of the Sailor Senshi show up. Then, Kunzite shows up. Then he attempts to kill everyone in the arena, all the scouts, his youma, and Tuxedo Mask, by making it, like, really cold. Then, instead of staying there to make sure that nobody escapes, he leaves, boasting that he’ll return later for the Silver Crystal.

Then Tuxedo Mask destroys the ice machine, Sailor Moon refreshes Janelyn and Misha, and everybody escapes. Tuxedo Mask runs off before anybody can question him, the Sailor Senshi ask Makoto if she’s okay, having lost another guy who reminded her of the one who broke her heart, but she immediately sees another guy who reminds her of the guy who broke her heart and we have our ending beat for the episode.

Not much to talk about in this episode, you know it’s basic formula stuff when even the Senshi seem to be picking up on it. I wouldn’t mind knowing exactly what the Dark Kingdom thinks they’re getting out of Tuxedo Mask, though. Despite his brainwashing, he still interferes with their plans, he’s still trying to get the Silver Crystal for himself, and now they can’t even use him as a hostage to lure Sailor Moon, because he’s “on their side.” He’s pulling the kind of end-of-story-arc meddling that’s gotten other Kings of Heaven shoved into a giant crystal or outright killed by Queen Beryl, but he’s still around. I get the sense that this is all based on orders from Queen Metalia, but still, there’s got to be something that they’re getting out of embracing a loose cannon top-hat-wearer who doesn’t play by the rules.