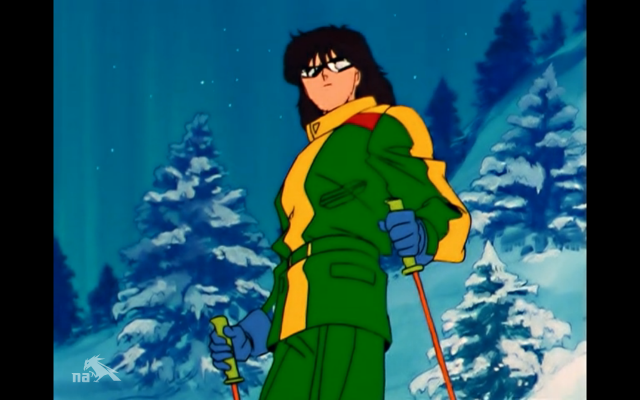 Another week, another time to spin the big wheel of Dark Kingdom schemes and see where the pointer lands. 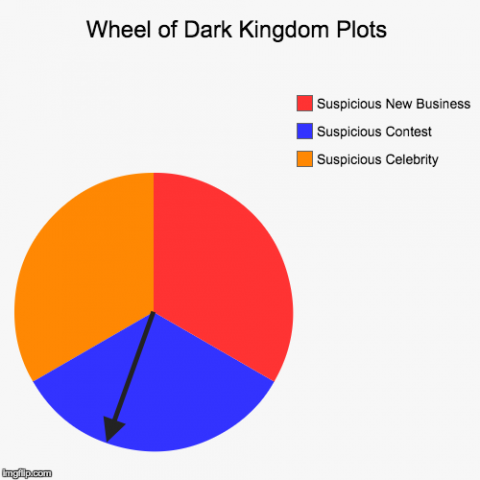 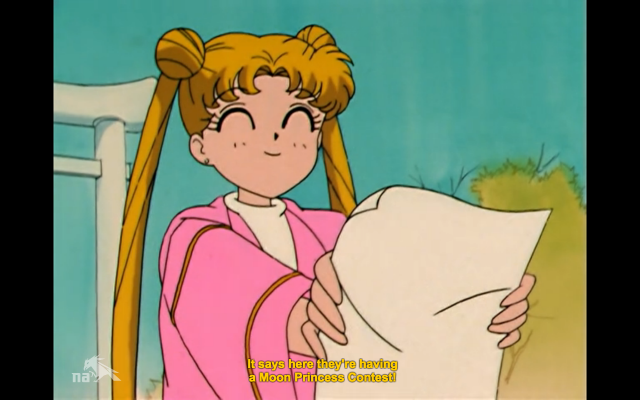 Yeaaah, there we go.

All the Sailor Senshi are excited to enter this highly suspect contest thats only connection to the moon is that it takes place at night, and that has no specific connection to princesses. Because it is a skiiing contest. And skiing has nothing to do with moons or princesses.

They decide to ditch Luna and Artemis anyway and head up the mountain. This is simplified by their guardians’ intense feline desire to sleep on top of space heaters now that the weather has gotten cold, and complicated by their difficulty in finding lodgings for a team that is now five members strong. This is simplified again by the reveal of lovable stoner Yuuichirou’s secret origin: he’s actually totally stinkin’ rich, is only training at the shrine to “refine himself,” and he’d love to take them up to his family ski lodge for the weekend.

But wait, we can’t start the action without checking in with the Dark Kingdom. 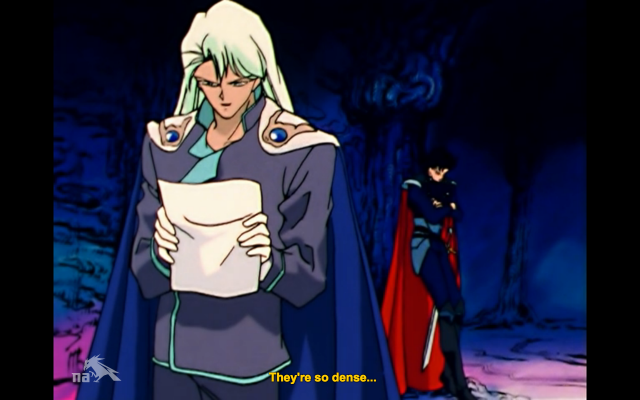 …And that’s why I felt free to make the most obvious trap ever. 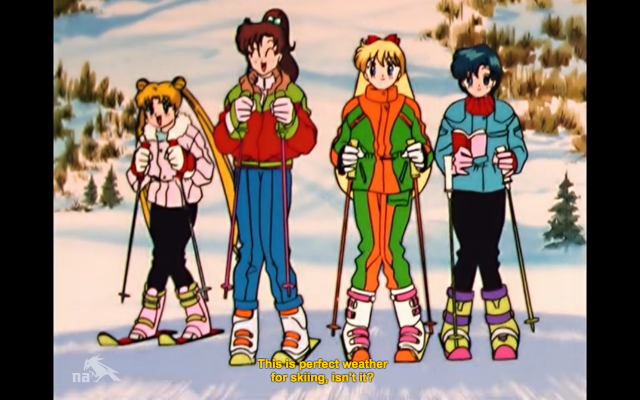 Oh man. I’m pretty sure I owned a trapper keeper that matched each of these oh my god I just noticed that Ami is skiing and READING AT THE SAME TIME, christ, Ami is me in elementary school. It turns out that Rei and Yuuichirou are the only people here who can actually ski, so Usagi’s got some stiff competition. (From Rei, that is. Yuuichirou is not entering the princess contest.) The two of them shepherd a nervous Usagi up to the top of the mountain and the race’s starting point.

There, we are introduced to Saeko Yamamoto, a previous winner of this skiiing contest who’s been taken over by the youma Blizzar. Kunzite has given her the magical ability to “uncover Sailor Moon’s true identity” which really seems like an ability that he should give himself, like, all the time. Saeko announces that, just like last episode, the most graceful woman in the pack will win, and then the race is off, and even Usagi doesn’t get to chicken out as a cheerful Yuuichirou pushes her onto the slope. Saeko follows behind the pack, throwing up magical snow booby traps as soon as they’re out of sight, clearing all the racers from the course except…

Rei and Usagi. Rei is too good at skiing, and Usagi’s uncontrolled erratic flailing makes her a difficult target for Saeko’s giant summoned snowball, at least until she raises giant ice walls on either side to prevent the two from evading it. It’s time for Yuuichirou to be the useless, selfless hero. 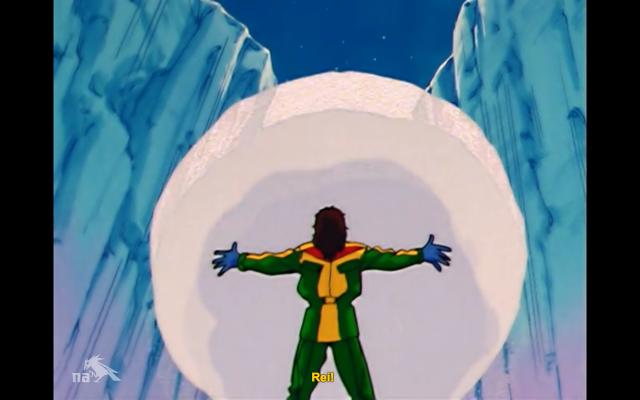 Eventually Saeko does manage to trap Usagi and Rei in a pit of snow with sides too sheer to climb out of. Naturally Rei blames their predicament on Usagi, and, saddened, Usagi attempts to cheer herself up by playing with Tuxedo Mask’s locket, which brings us to the heart of this episode: Usagi, Rei, and how they feel about being attracted to what turned out to be the same guy.

And everything starts with Usagi realizing that what she’s doing to feel better might make Rei feel strong emotions, and she apologizes for not realizing that. Rei assures her that she got over Mamoru as soon as she considered the strength of his feelings and caring for Usagi. She’d rather he be happy with Usagi than indifferent with her, showing that even though Rei is a girl who sees what she wants and goes after it, she can recognize that simply wanting a romantic relationship with somebody can’t make them want the same with you. Take that, friend zone! But… 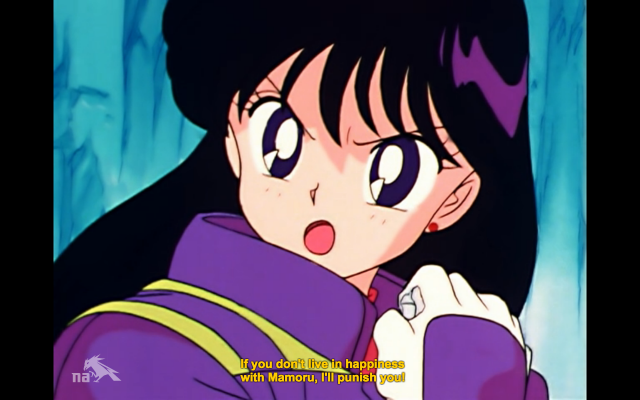 Besides, she concludes, there’s no time to pine over guys when the Dark Kingdom is still up to no good. Which is when Usagi reminds her that she could have transformed and used Fire Soul to melt them both out of this mess any time. But transformation is nixed by the appearance of Yuuichirou, who has dug a tunnel through the snow to safety, and then escape is nixed by the appearance of Saeko, who reveals herself as the youma Blizzar and boy is she kinda dumb looking. 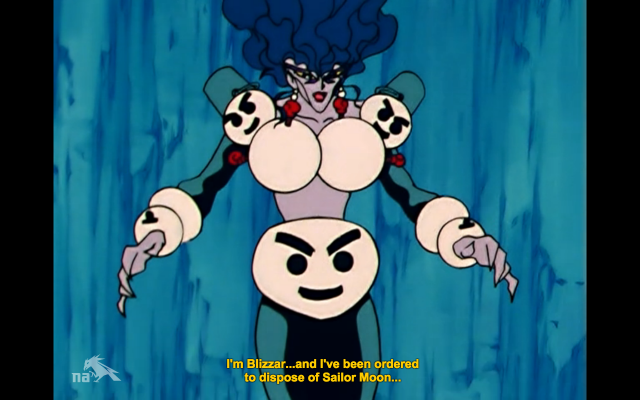 Snow man boobs and disapproving pelvis. The gauntlet has been thrown, cosplayers.

“Prepare to die, Sailor Moon!” shouts Saeko at Rei, because in this episode the Dark Kingdom thinks that the most graceful finalist is Sailor Moon, not the least graceful. Maybe nobody explained the new protocol to Blizzar? Maybe she’d like to reconsider? 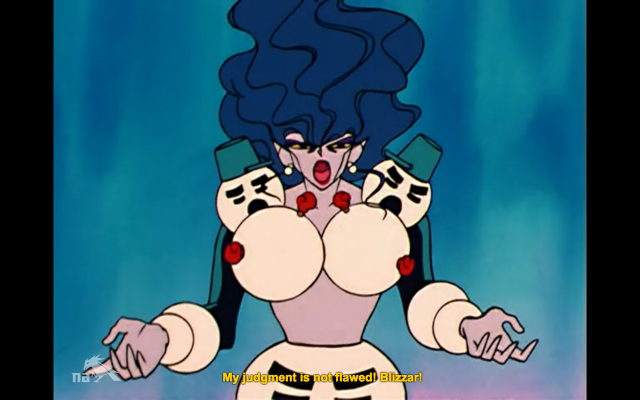 Because Yuuichirou is all about being convenient for the plot these days, he leaps in front of Blizzar’s attack and is knocked unconscious, freeing Rei and Usagi to transform without risk to their secret identities. Blizzar dodges a Fire Soul and nearly stabs them with an ice spear, only to be stopped by Tuxedo Mask, who wants to finish the job himself. Unlike last episode, when he was actively attempting to stop Sailor Moon from being killed before she handed him the Legendary Silver Crystal. Rei does a great job of attempting to overcome his brainwashing with guilt about betraying his true love Sailor Moon and she really seems to be getting somewhere, until Tuxedo Mask is distracted by another spear attack from Blizzar. Sailor Moon uses the confusion to Moon Healing Escalation Blizzar back into Saeko and by the time she’s done Tuxedo Mask is walking off in a huff like usual.

Rei and Usagi get Yuuichirou out of the snowpit and set up with a campfire until they’re found by the other senshi and ski park staff, and we cap this episode like all episodes in which Usagi and Rei learn to be friends: with Rei insulting Usagi to her face and Usagi bawling.

Now that we’re three episodes into a new arc, I feel like I have enough information to comment on how loosely themed this arc feels in terms of Dark Kingdom plots. The previous three had very specific themes to their antagonist motivations that lead to three distinctly different kinds of episode tension: stealing energy from many people, stealing energy from powerful people, and unleashing youma hidden in specific people. Clearly Kunzite’s motivation is to discover Sailor Moon’s secret identity and kill her by creating traps specifically for her, but since Dark Kingdom plots intended to be totally covert always attract Sailor Moon somehow anyway, this is indistinguishable in any real way from your average Dark Kingdom plot. Furthermore, I feel like it takes some of the tension out of anticipating the new scheme each episode.

Ah well, we’re only three episodes in, so maybe Kunzite will get a little more creative.